Following the dialogue with Gore, Meacham welcomed Condoleezza Rice, the 66th Secretary of State, to the project’s first case study—an examination of the role facts and data played in securing bipartisan support for the creation of the President’s Emergency Plan for AIDS Relief (PEPFAR).

Chancellor Daniel Diermeier hosted the virtual event as the first spring semester event of the Chancellor’s Lecture Series, which strives to connect the university and community with leaders and visionaries who are shaping our world.

Meacham, the Carolyn T. and Robert M. Rogers Professor of American Presidency, opened his conversation with Gore focusing on the importance of evidence and reason in political discourse, a theme from Gore’s 2007 book, The Assault on Reason (second edition, revised, 2017).

“If I were to do another book revision, I might start with what happened in the nation’s capital this past week,” Gore said. “Our democracy depends upon a free discourse, during which we come up with what we can all agree is more likely to be true than not. And when there is an industrial-scale constant effort to pump lies into the body politic, and to persuade people of falsehoods, then the promise of American democracy can be seriously damaged.

“Tectonic shifts in the way in which we communicate with one another have always reverberated in the political and geopolitical sphere,” said Gore, who represented Tennessee in the U.S. House and Senate prior to his election as the 45th Vice President of the United States in 1992.

He contrasted the challenges of political communication today with the ease by which American Revolution-era writer Thomas Paine printed and disseminated his Common Sense. Candidates today often have to spend millions of dollars on ads, and audiences are divided into broadcast “echo chambers” that simply reinforce their beliefs.

To exemplify Gore’s data-driven policy making, Meacham brought up Gore’s leadership on arms control as the former congressman worked across the aisle to diminish the nuclear arms race and assuage his constituents’ fears of war with the Soviet Union.

“You approached this not as an ideologue but as a person searching for evidence,” Meacham said.

Gore embarked on an intensive course of study over 13 months to unravel the “arms control puzzle” and stated that he felt armed with the necessary facts and evidence to marshal bipartisan support in the House.

When asked by Meacham for his best practical advice “to encourage a fact- and evidence-based discourse in a world consumed with … ideological conflict,” the former Nobel laureate said, “read, reflect and engage with others, including with those whom you think disagree, and then work with them to try to find common ground.”

Rice: Leading not just from power, but also from principle

Meacham then began the event’s second conversation with Condoleezza Rice, 66th Secretary of State, political scientist and current director of the Hoover Institution at Stanford University, where she has been a faculty member since 1981. As the project’s inaugural evidence-based case study conversation, Rice discussed the intersection of American ideals and fact-based analysis necessary for the passage of legislation that created PEPFAR in 2003.

To date, PEPFAR has received more than $85 billion in unified U.S. government support, the largest commitment by any nation to address a single disease in history.

“I do think that one of the ways we find unity is that we find the better angels within ourselves as a country, and that’s our compassion,” Rice said. “The United States has always led not just from power, but also from principle—and in the case of PEPFAR, I believe it was American compassion that was coming to the fore.”

Queried about the relationship between PEPFAR and President George W. Bush’s response to the terrorist attacks of Sept. 11, 2001, Rice observed, “9/11 and our military response kept much of our focus on keeping the United States safe, and we only had so much bandwidth,” noting that the program didn’t start until two years after 9/11.

“However, it also provided a new impetus for the idea that Americans needed to be concerned about helping other parts of the world govern better and deal with their problems,” she said.

Rice observed that Bush firmly believed “in the obligation to those who have less,” following the evangelical Christian center that “to whom much is given, much is expected.”

Ensuring the program would be effective in HIV/AIDS treatment and prevention was one of the biggest priorities for the Bush administration. “We spent extensive time identifying good leaders on the ground, as we knew we had to demonstrate efficiency and good results,” Rice said.

As the conversation drew to a close, Meacham asked for Rice’s thoughts on how America moves forward after the past four years and turbulent recent days.

“I am even more optimistic now about American democracy and these great institutions that the framers figured out more than 200 years ago have to invoke freedom to act and to constrain people’s worst impulses,” she said. “Should we work to reintegrate a belief in those institutions for those who have lost faith in them? Absolutely!”

The Vanderbilt Project on Unity and American Democracy aims to elevate research and evidence-based reasoning into the national conversation on unity. The project is co-chaired by Meacham, former Tennessee Gov. Bill Haslam, and Samar Ali, a former White House Fellow and research professor of political science and law.

To learn more about the project and view the conversations, www.vanderbilt.edu/unity. 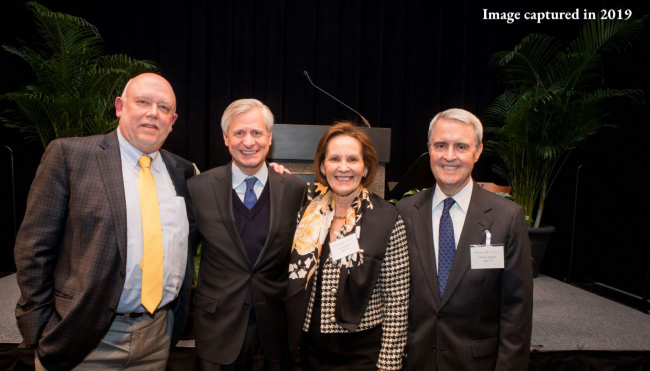