Research on the cultural history of diabetes, including how racism played a role in the  erroneous blaming of certain racial and ethnic groups for the rise in cases, offers important lessons for COVID-19 and other public health challenges, said Arleen Tuchman, the Nelson O. Tyrone Jr. Professor of History at Vanderbilt University.

Tuchman is the author of a new book, Diabetes: A History of Race and Disease (Yale University Press, 2020). Her interest in exploring the history of the complex disease was partly driven by her father’s own challenges of living with the disease for 28 years.

In researching professional and popular publications on diabetes that spanned more than a century, Tuchman found that the racial and ethnic groups considered most susceptible to the devastating disease changed radically over time.

“During the late 1800s, as people began living longer and more cases were diagnosed, diabetes was believed to be a white, middle-class disease,” Tuchman said. “And the specific group that many believed had the most cases was the Jewish population. Some thought that diabetes revealed Jews’ gluttony and neuroses. For others, diabetes was a sign of the Jews’ ‘highly civilized’ state.”

She noted that people of color and impoverished whites remained largely invisible in the literature on diabetes through the first half of the 20th century. However, by the 1950s, medical researchers with the U.S. Public Health Service reported that several Native American tribes had extremely high rates of the disease.

“Over time, diabetes lost its status as a disease of ‘civilization’ and slowly the perception became that it was more a disease of ‘primitive’ populations that were thought to be unable to adapt to a Western lifestyle,” Tuchman said. 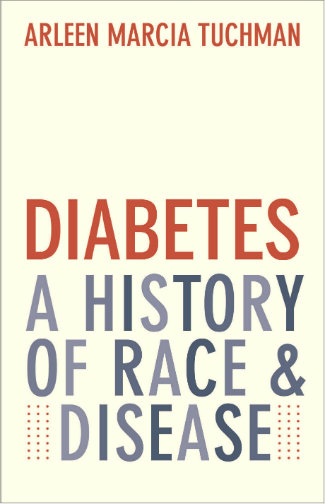 She also noted that the medical community did not make much distinction between Type 1 and Type 2 diabetes until the 1970s. “They knew that it mattered whether you developed the disease when you were young, as compared to middle or old age, since the prognosis was far worse for children,” Tuchman said. Nevertheless, most physicians and researchers still thought of diabetes as a single disease.

“It seems more than coincidental to me that at the time they began to associate middle-age diabetes with poverty, minority populations and unhealthy lifestyles, they split the disease into Type 1 and Type 2,” she added.

In 1985, after the creation of the Office of Minority Health, diabetes was no longer a disease associated with the white middle-class community. Instead, there was increasing concern about its impact on minority groups, Tuchman said.

She hopes her research will help lead to a greater focus on public health and less reliance on acute care, which Tuchman said has not been able to respond adequately to COVID-19 and many other diseases.

“As an example, some people with diabetes cannot afford to have a podiatrist check their feet, increasing their risk for amputations,” she said. “And while the technologies for managing diabetes are improving all of the time, they are often not available for those without insurance. Even the cost of insulin is too much for some patients.”

“Having to live everyday with racism has been shown to contribute to chronic stress,” she said. “And chronic stress directly affects your physiology, increasing your chance for weight gain and chronic illnesses—including diabetes.”