Susan R. Wente’s exceptional leadership to protect the university community during the COVID-19 pandemic will be a defining moment of her legacy as interim chancellor. In addition to handling unprecedented challenges, she moved the university forward on many other priorities tied to learning and discovery and building a more inclusive Vanderbilt during her time as interim chancellor, which concludes on June 30.

Wente is receiving strong praise for her steady leadership and commitment to upholding Vanderbilt’s values during an unexpectedly challenging year for higher education, Nashville and the world.

“Susan Wente stepped up to take on the role of interim chancellor in the summer of 2019 while retaining her role as the academic leader of the university,” said Bruce Evans, chairman of the Vanderbilt University Board of Trust. “To top it all off, she helped the university manage its way through the COVID-19 crisis and then quickly pivot to developing a re-opening plan. I could not be more thankful for Susan, for her contributions to the university over a long period of time, but particularly for those during her period as interim chancellor. All of us at Vanderbilt owe Susan a huge debt of gratitude for her wonderful work.”

Wente, an esteemed biomedical scientist, assumed the role of interim chancellor on Aug. 16, 2019, promising that there would be no resting on the university’s accomplishments. “There’s no pause button,” Wente said as she became the first woman to lead Vanderbilt as interim chancellor. “It’s full steam ahead.”

Vanderbilt Divinity School Dean Emilie Townes is among those grateful for Wente’s strong leadership the past year. “Interim Chancellor Wente’s wisdom, care and steady hand has propelled us in ways that I don’t know any of us ever thought we could go and still maintain both sanity and scholarship, teaching and all those things that make Vanderbilt what it is and hopefully will always be … a place of learning with a heart and soul and a mind for inquisitive and never-ending exploration,” Townes said.

Wente emphasized the leadership principles of trust, transparency and teamwork at the 2019 Fall Faculty Assembly—promising that they would guide her work as interim chancellor, just as they have in her role as provost. And she continued to be a strong advocate for shared governance and engagement by faculty, staff and students to make grounded, informed decisions on the future of the university. These principals and beliefs have continued to drive Vanderbilt’s decisions and processes during the university’s response to the COVID-19 pandemic.

“It’s kind of a remarkable thing to become interim chancellor and then really have the crisis of a century happen,” said Jeff Balser, dean of the School of Medicine and president and CEO of Vanderbilt University Medical Center. “If you think about who Susan is and how she thinks and what her values are, then you really couldn’t have a better person leading the university at a time like that. Susan’s qualities as a leader are both vision as well as what I would call ‘operating savvy.’”

“Interim Chancellor Wente has demonstrated that she always puts Vanderbilt first, and her strength, fortitude and resilience is appreciated by the faculty and other Vanderbilt stakeholders,” said John McLean, outgoing president of the Faculty Senate and Stevenson Professor of Chemistry. “I also want to thank her for caring about each of us as individuals.”

Wente’s commitment to building greater diversity and inclusiveness on campus is reflected in her leadership appointments. Candice Storey Lee is the first female athletic director in Vanderbilt’s history and the first African American woman to serve in that role in the Southeastern Conference. Also, Lorenzo Candelaria will become the Blair School of Music’s first Latino dean on July 1.

André L. Churchwell was named vice chancellor for equity, diversity and inclusion and chief diversity officer for the university after serving over the past year in the interim role, and William Robinson was selected as vice provost for academic advancement and executive director of the Provost’s Office for Inclusive Excellence. They are co-leading the University Diversity Council that was launched by Wente last fall to advocate for diversity across all areas of the university. In making these appointments, Wente noted that transformational leadership and expertise will be critical in driving the conversations to move Vanderbilt forward on fighting racial injustice and inequity.

Wente has continued to be an advocate for women on campus through the work of two different councils. The Provost’s Women’s AdVancement and Equity (WAVE) Council hosted a town hall and has been studying the results of multiple student and faculty surveys on issues that affect women faculty and students. Meanwhile, the Staff WAVE Council held listening sessions to hear about the experiences of women staff on campus with professional development, work-life balance and more.

Elevating the Arts and Humanities

Last fall, Wente appointed faculty and staff to a new University Arts Council to promote the arts on campus and work to increase the university’s connections with Nashville’s creative community. She also launched an online portal to spotlight creative scholarship by Vanderbilt’s arts and humanities faculty. Other highlights include a town hall that Vanderbilt co-hosted on campus this spring with the National Academies of Sciences, Engineering and Medicine to focus on how the humanities are vitally connected to the STEMM disciplines.

Wente pledged at the 2019 Fall Faculty Assembly that the creation of new and innovative programs would not slow down during the transition between chancellors, citing GlobalVU as one example. The initiative grew out of the International Strategy Working Group to becoming a TIPs initiative. And the Global Fellows Program—designed to bring visiting scholars from around the world to campus—was launched this spring with Philippe Étienne, French ambassador to the United States, speaking on campus. Although efforts might need to take different approaches this next year due to COVID-19, there is a new foundation now in place for the future.

Also raising the university’s international profile this past year was Wente’s leadership of the Chancellor’s Lecture Series, with such prominent speakers as Terry Crews, George Takei, John Bolton, Susan Rice, Al Gore Jr., Janelle Monáe and Chimamanda Ngozi Adichie, among others. Wente expanded the events to include faculty and student moderators to bring more perspectives from the community to the table.

Significant progress has continued with FutureVU initiatives—as evidenced by not only trucks and cranes on campus—but also the expansion and renewal of several facilities. The Nicholas S. Zeppos College is scheduled to open by mid-August. The new Faculty Commons is under development in an architectural gem of a building acquired by the university at 1101 19th Ave. S. It will also be the new home for the Faculty Senate and the trans-institutional digital commons.

Sustainability efforts during Wente’s leadership have included the university advancing the effort to be carbon neutral and power the campus exclusively with renewable energy by 2050. The university entered into a pioneering agreement with the Tennessee Valley Authority and Nashville Electric Service to procure off-site large-scale renewable energy to help mitigate the campus’ greenhouse gas emissions.

Wente, who will continue to serve as provost and vice chancellor for academic affairs, has been honored by the Vanderbilt Board of Trust with the new faculty appointment of Cornelius Vanderbilt Chair. 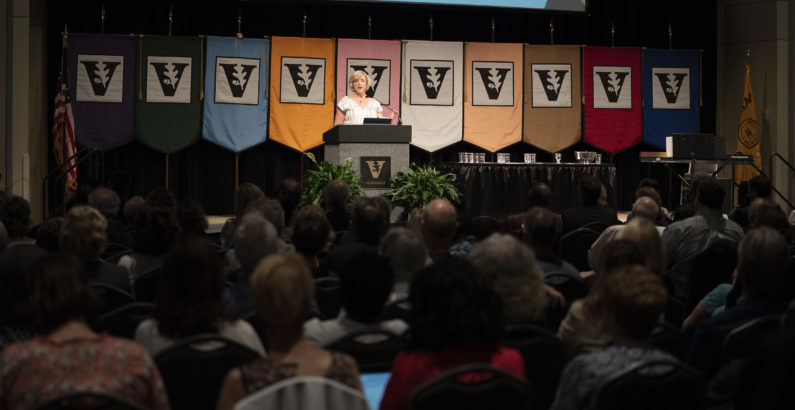 Interim Chancellor Wente honored by Board of Trust

TweetThe @Vanderbilt_U community is thanking Interim Chancellor Susan R. Wente for her exceptional leadership the past year as she returns full-time as @VU_Provost July 1