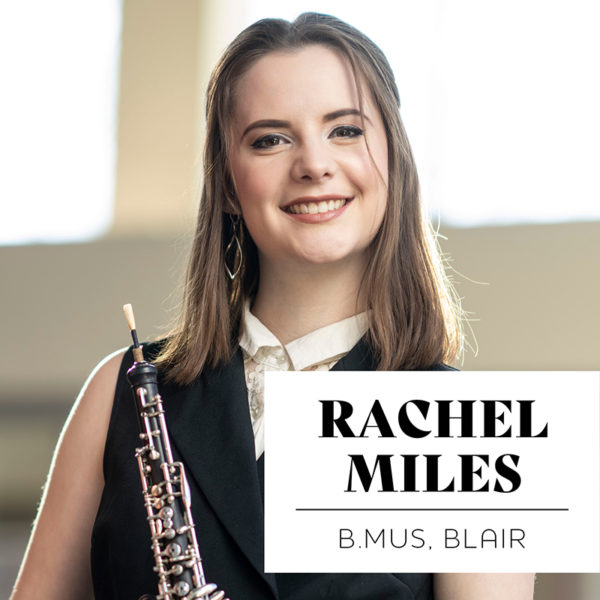 “When I was applying to and auditioning for colleges, I was 17. I didn’t know what I wanted to do with the rest of my life,” she says. “My senior year of high school, I was in the Cleveland Orchestra Youth Orchestra, and that experience gave me hope I’d never had before … that I could ‘live the dream’ and pursue classical music as a profession. But I also have always had an innate curiosity and love for the natural world, so I thought science could also be a path for me.”

Vanderbilt proved to be the perfect fit for the Brunswick, Ohio, native, who majored in oboe performance through the Blair School and minored in chemistry and biological sciences through the College of Arts and Science.

“[For college] I wanted to be surrounded by people who were different from me,” she says. “It was valuable to be in a place where everyone had really different interests and passions and things they were pursuing. I wanted to be allowed to be wrong so I could learn new things.”

Among the “new things” Rachel discovered at Vanderbilt was a passion for community service. She participated in Alternative Winter Break as a first-year, and went on to become a site leader and eventually an executive member of Alternative Thanksgiving and Winter Break. She has worked with Open Table Nashville (OTN), an advocacy organization for people experiencing homelessness, and received a grant through Vanderbilt’s Nichols Humanitarian Fund to spend a summer doing outreach work with LGBTQI+ youth in Sofia, Bulgaria.

“We helped put on and organize all of Sofia Pride,” she says, “and I was particularly involved in a project where we were trying to implement a program for HIV test-kit distribution through Grindr and other geo-sexual networking apps.”

“It was valuable to be in a place where everyone had really different interests and passions and things they were pursuing. I wanted to be allowed to be wrong so I could learn new things.”

With her bachelor’s degree in hand, Rachel plans to spend two years working with the Peace Corps as an adolescent health promoter in Guyana, although the COVID-19 pandemic may affect those plans. In the meantime, while she has deeply loved being a music performance student, Rachel is moving toward a medical career, taking the MCAT and planning to attend medical school after her Peace Corps stint.

“I’ve had to learn to explain that my music degree and the skills I have acquired here are very relevant,” Rachel says. “From the dexterity I’ve developed from years of making reeds, to managing my time extremely well, the list goes on and on. I know how to work well not only independently but also as part of large and small teams. I know how to collaborate, how to take criticism well, and how to have close mentorship relationships and foster them even when that might be hard. There are so many qualities of being a music student that are applicable to being a medical student one day.

“It does make me sad to think that my future is not as an oboist. But I’m really proud of myself for not letting anyone else make that decision for me, and for having given all of myself to my craft for as long as I could. I’m so, so lucky to have been able to be at the Blair School.”