One weekend program convinced Nnamdi Okabuonye that Vanderbilt was where he wanted to be. A second initiative validated his choice early during his first year as an engineering student. 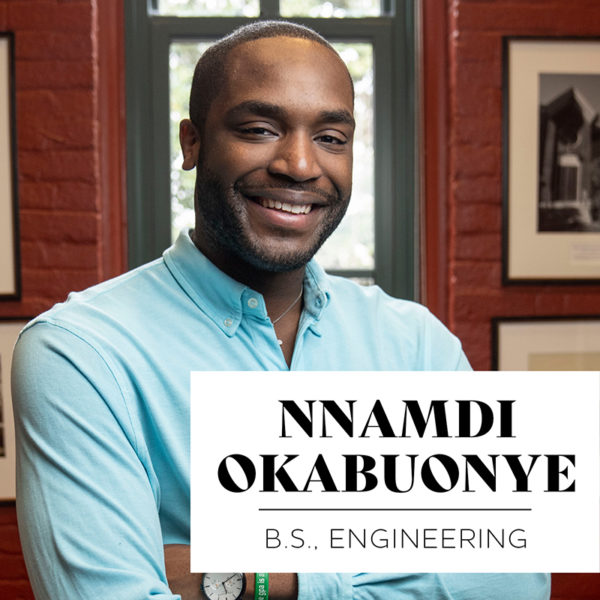 Okabuonye was among several hundred prospective students who attended the MOSAIC Multicultural Weekend on campus in spring 2016, staying with first-year students on The Martha Rivers Ingram Commons; visiting cultural, religious and gender identity centers; attending campus arts performances; and hearing from motivational speakers. He got so much out of it that he served on the organization’s executive board during his four years at Vanderbilt, including as co-chair in 2019–20.

“One of the things I loved most was the cultural showcase,” Okabuonye says of his own MOSAIC weekend. “The other was ‘Commodore Conversations,’ when we were paired with other Vanderbilt students to hear about their true experience here—the nitty gritty.

Okabuonye, who majored in computer science, is from South Holland, Illinois. He says he arrived on campus “feeling not too confident.”

The first semester of calculus didn’t help. Nor did his first computer science class because he’d had little exposure to coding as a high school student. Okabuonye, like many Vanderbilt students, found himself struggling with academics for the first time.

The VUcept program made the difference. VUcept is a peer mentoring organization that supports first-year students in small groups with an upper-division student, special learning opportunities and meetings with faculty.

“In my first calculus class, I had no idea what I was doing,” said Okabuonye, who received a Chancellor’s Scholarship at Vanderbilt. “My VUceptor gave me the confidence to keep pushing through.”

The program was so valuable that he became a VUceptor himself to new batches of first-year students during his junior year. Ongoing camaraderie among engineering students was extraordinary, too, he says.

“I expected it to be cutthroat, not so collaborative. The engineering school is like a family—we all struggle together.

“I expected it to be cutthroat, not so collaborative. The engineering school is like a family—we all struggle together. At 2 a.m. you can walk through Featheringill Hall and see tons of engineering students studying. I really love that.”

During the summers Okabuonye has taken part in mentorship programs at Citi and Accenture, and last summer he worked as a technical analyst at Citi’s Houston operation. He spent a Maymester in China and earned a minor in Chinese language.

He now anticipates moving to the Seattle area to work as a software developer for Microsoft. Long term, Okabuonye wants to pursue an MBA and become a diversity officer at a company or university. Other institutions could learn something from Vanderbilt, he says.

“The people make the school,” he says. “Right from the start I felt really supported, and people made me feel welcomed and loved. The attitude and vibe on campus is that it is a warm and welcoming place.”