One thing Brittany Hunter can list on her résumé is: “excels at taking a new perspective.” 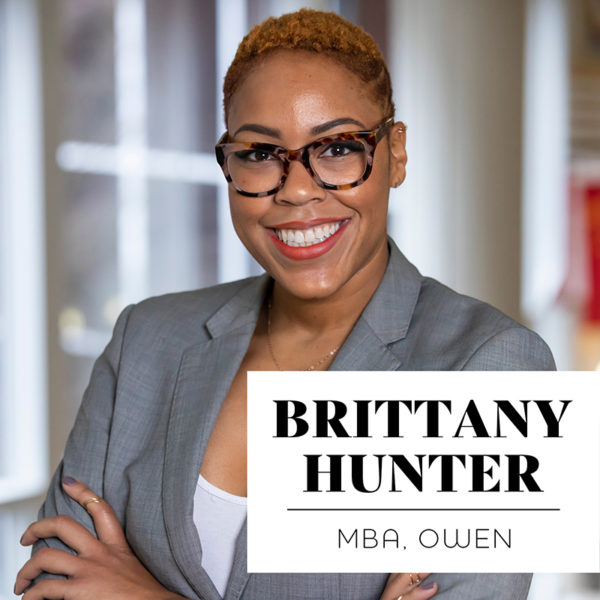 As the nation’s top female high school basketball recruit, she had long eyed a pro career. But during her freshman season at Duke, a knee injury scuttled that dream, prompting Hunter to reassess her goals, transfer to the University of Connecticut, and focus on earning bachelor’s and master’s degrees in sports marketing.

Hunter also didn’t follow a traditional path to Vanderbilt’s Owen Graduate School of Management. After graduating with her undergraduate degree, she coached basketball and then became an educator. At a charter school in Harlem, New York, she started as dean of students and later became a fourth-grade teacher. Friends chided her for moving down the ladder.

“I felt that moving laterally through education gave me a better scope for the school and empathy for the challenges we faced,” Hunter says. “It also gave me more visibility to people at the top.”

Hunter came to Owen to improve her fluency in business and finance, with a perspective different from many of her classmates. “I was 32. I already had a graduate degree. I’d worked for eight years,” she says. “I knew that it’s not possible to master everything, that being a perfectionist works against you. I had learned that I was better at my job when I stopped trying so hard to excel.”

“I knew that it’s not possible to master everything, that being a perfectionist works against you. I had learned that I was better at my job when I stopped trying so hard to excel.”

Hunter focused on a human resources career after hearing several top HR officers speak at Owen. “They all said that something MBA students need to know about building a successful career is that it’s a lateral game, not a ladder game,” she says. “HR gives you that opportunity.”

During the past several months, Hunter and her classmates have been forced to cope with the emergence of the COVID-19 pandemic during the final months of their MBA studies. “There are a few classes I was looking forward to, but now I’m really focusing on what’s coming next for me and my career,” she says.

Hunter interned in HR at Microsoft in Seattle during the summer of 2019 and is headed there to launch her next career. “It’s such a big company that moves at a fast pace, and you have a lot of autonomy,” she says. “Microsoft is very people-centric, and that’s the best fit for me.”