In seventh grade Eve Moll was an active dancer, but then a diagnosis of adolescent scoliosis in her spine threw her for a curve—literally. 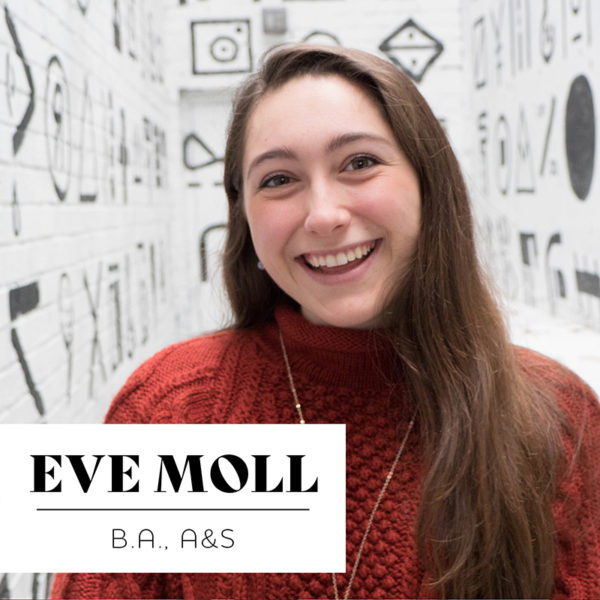 “When I first saw the X-ray, my jaw just dropped to the floor,” says the Davie, Florida, native. “I felt like my body was hiding a secret from me.”

What followed was spinal fusion surgery and an extensive recovery and rehabilitation period that curtailed dancing for a while. But that time allowed Moll to focus on other interests.

“I wound up spending more time committed to speech and debate than dance because I realized just how much I loved it,” says Moll, who also developed a love of painting. “And I continued to follow up with my surgeon. He’s become a kind of mentor to me.”

Moll, an Honors Scholar in the College of Arts and Science and a recipient of the Harold Stirling Vanderbilt Honor Scholarship, pursued a pre-med double major at Vanderbilt in molecular and cellular biology and in communication of science and technology. But while her interest in science took firm hold during her first year, her lack of time to make art led to a further revelation.

“My freshman year, I didn’t make any art at all,” she says. “I was going crazy without it. I wondered if there was a way to combine art and science so I didn’t have to feel I was sacrificing one for the other.

“I had a feeling there was a connection, and I thought it was worth exploring.”

“I had a feeling there was a connection, and I thought it was worth exploring.”

Moll asked David Weintraub, professor of astronomy and director of the program in Communication of Science and Technology, to connect her with someone like-minded—someone who was both scientist and artist. He introduced her to Kendra Oliver, assistant professor of pharmacology and senior lecturer in the communication of science and technology.

“She had this idea of doing an art lab, so together we started piloting different ideas,” Moll says.

With support from the Wond’ry and the Curb Center for Art, Enterprise and Public Policy, Oliver and Moll’s brainchild, named ArtLab Vanderbilt, became reality. “We wanted to explore the intersection of art and science,” Moll says, “looking at things like the creative process or what it means to be a critical thinker—bigger-picture kinds of concepts.”

Under the auspices of ArtLab, where she served as an undergraduate fellow, Moll has exhibited oil paintings about epigenetics, done drawings inspired by the structure of a binary toxin and its movement through cell membranes, and curated an exhibit about women in science that featured her artwork along with Oliver’s and that of Marilyn Murphy, professor of art, emerita.

As Moll makes plans for medical school—and a possible future in orthopedic surgery—she also continues to see art in her future as a balance to the study of science.

“I don’t know if it will look exactly like it does in ArtLab,” says Moll, who plans to attend medical school at Washington University in St. Louis. “It could look like art therapy for my patients or a communication strategy for new kinds of ideas. But I think there will be room for art in medicine.”