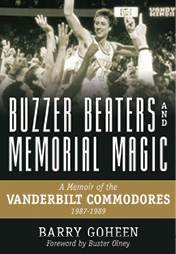 Barry Goheen, BA’89, JD’94, the Vanderbilt basketball player who became nationally known for his numerous clutch shots that lifted the ’Dores to victory, is author of the new book Buzzer Beaters and Memorial Magic: A Memoir of the Vanderbilt Commodores, 1987–1989 (2019, Mercer University Press). Buster Olney, BA’88, a senior writer for ESPN who witnessed many of Goheen’s heroics firsthand as a student, writes in the foreword, “Barry wasn’t the best player in the conference, or the best player on the team; he was unassuming, until somebody needed to score when it mattered the most. As Vanderbilt coach C.M. Newton said, it was downright spooky how often Barry succeeded in the most pressure-filled moments.”