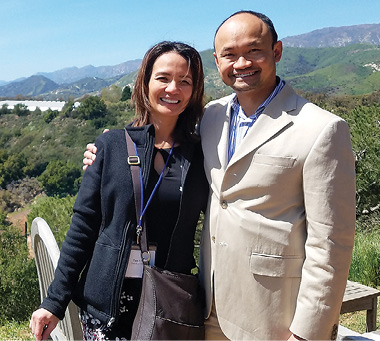 Duc Pham often speaks about how lucky he has been, despite a difficult childhood during the Vietnam War after which his father, a police captain in South Vietnam, was sentenced without trial by the North Vietnamese to seven and a half years of hard labor in a prison camp.

“When my dad was released from the labor camp, he realized there was no future for our family in Vietnam,” Pham says. “So he decided to get us out of the country.”

In 1983 the family of seven escaped by boat, eventually landing at a refugee camp in Malaysia. They were accepted for resettlement in the U.S. as political refugees, arriving in Houston, almost 15 months after fleeing Vietnam.

Despite 23 years of nursing experience in Vietnam, Pham’s mother couldn’t pass a nursing exam due to language challenges. His father had no vocation other than his experience as a police officer. People from their hometown, who had connections at a local bank, helped them purchase a foreclosed grocery store, which they ran for 20 years until their retirement.

Coming from a war-torn country fueled Pham’s desire to help people through medicine.

“I saw people with war injuries, lost limbs, permanent disabilities and disfigurement,” Pham says. “I knew I wanted to be a doctor because I wanted to do good for society.”

Completing his undergraduate degree at Dartmouth, he chose Vanderbilt for medical school. He received the Canby Robinson Scholarship, which covered his full medical school tuition. For Pham, it was a life-changing gift.
He realized his passion for plastic surgery while at Vanderbilt. More than 20 years after graduating, Pham still credits his time in Nashville as a transformative period in his life.

“I don’t think that I would be where I am today without the support and education I got at Vanderbilt,” he says.
Despite their difficult circumstances while he was growing up, Pham says giving back was always central to his family’s philosophy. In 2019 he and his wife, Tam Le, established the Sanh Thi Pham, RN, Scholarship for graduate students at the School of Nursing in honor of his mother. Through a planned gift, they also have established the Pham Le Scholarship for students at the School of Medicine.

“I always wanted to honor my parents because they sacrificed tremendously for us,” Pham says. “And my mom was the one who had the greatest impact on my medical education. She was my inspiration and motivation.”