As director of the Center for STEM Education for Girls at Harpeth Hall School in Nashville, retired Navy Capt. Barbara Bell, EdD’18, wants to give girls the confidence and knowledge to excel in technical careers long dominated by men.

A 28-year veteran and one of the first women graduates of both the U.S. Naval Academy and the U.S. Naval Test Pilot School, Bell is uniquely positioned to deliver on that promise.

“My goal is for girls to know that they are good at math and science, that they can code, and that they can learn the engineering design process and employ it to design a project,” she says. Bell recently led the STEM Summer Institute programs at Harpeth Hall for middle- and high-school girls from across Nashville, allowing them the hands-on experience to do just that.

The younger students developed concepts for safe lighting that would allow girls in rural Kenya to study after dark. The high-school students worked to design safe, environmentally friendly ovens for the same population.

“It was exciting to see them understand the problem and work together to develop solutions, and also understand that the failures along the way were learning opportunities,” Bell says. 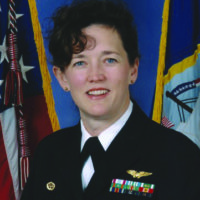 Bell charted a path to the U.S. Naval Academy in high school. She graduated in 1983 with a degree in systems engineering—among the first wave of women admitted into the academy—and received her “wings of gold” as a naval flight officer a year later.

Buoyed by her success, she set her sights on the elite Test Pilot School. Despite Bell’s outstanding record, her career adviser was less than enthusiastic about her chances.

Undaunted, Bell was accepted as the only woman in her class and graduated in the top three. She later returned to the school as its first female instructor.

“I feel exceptionally fortunate at this stage in my career to be in the position to help launch the next generation of women STEM leaders. They are the gateway to the future.”
—Barbara Bell

During her Navy career Bell earned a master’s in astronautical engineering, held a wide range of positions, and flew more than 1,600 hours in 35 types of aircraft.

She is sharing the lessons she learned in her military career in a new book she’s writing, Flight Lessons: Learning to Fly.

After retiring in 2007, Bell was consulting in the aerospace industry when she realized she was ready to do something different. She earned a master’s in theology in 2015. But she had long considered herself an educator, often visiting classrooms to demonstrate the science and technology behind an aviator’s flight gear. Research into leadership and education programs led her to Peabody, where she enrolled in the Ed.D. program.

“Most of the students in my 22-person cohort flew in every other weekend for classes,” Bell says. “I was impressed by their dedication and their willingness to pursue their degree. We learned a tremendous amount from each other.” One focus of the cohort’s research was on helping underrepresented populations up and over the bridge from high school to higher education, especially in STEM fields.

“I feel exceptionally fortunate at this stage in my career to be in the position to help launch the next generation of women STEM leaders,” Bell says. “They are the gateway to the future.”

In recognition of the patriotism, scholarship and leadership qualities and capabilities of veterans, Vanderbilt University launched the Bass Military Scholars Program in 2018 to provide scholarships of $25,000 per year to an annual cohort of highly talented veterans pursuing graduate and professional degrees across five Vanderbilt schools, including Peabody College.

The Bass Scholarship application window for the 2020–21 academic year opened Aug. 1, 2019, and closes Feb. 10, 2020. All application requirements must be complete by Feb. 14, 2020. For more information visit vanderbilt.edu/bass-military-scholars.