Haslam, who served as mayor of Knoxville prior to his two terms as governor, will join John Geer, Gertrude Conaway Vanderbilt Professor of Political Science, and historian Jon Meacham, who holds the Carolyn T. and Robert M. Rogers Chair in the American Presidency, to teach a popular upper-level undergraduate course titled “Leadership.”

“I am excited about the opportunity to be in class with John Geer and Jon Meacham,” Haslam said. “This class will be a great forum for a lively discussion about leadership in today’s political environment, understood in a historical context. I look forward to sharing some observations and lessons learned from serving as a mayor and governor.”

“Leadership” examines the actions of political actors in the interest of better understanding how these individuals not only made important decisions but encouraged and inspired others to support their vision of the nation. In addition to the U.S. presidents, this year’s course will closely study the leadership strategies of former Supreme Court justice Sandra Day O’Connor and civil rights leader Rosa Parks.

“Leadership is an intrinsic and yet mysterious force in human affairs, and the best way to prepare students for the responsibilities that await them, I think, is to consider how leaders of the past have struggled with the defining issues of the ages,” Meacham said.

“In this era of polarized political discourse, it is important to take a clear-headed look at leadership and its importance to the political system,” Geer added. “This course seeks to accomplish that important goal. Governor Haslam’s experience and insight offers important perspectives, because not only has he practiced leadership in his years of public service, he has given serious thought to the subject. With Jon Meacham’s historical insight, students will have multiple ways to engage with this critical topic.”

Haslam is a Knoxville native. Educated at the Webb School and Emory University, he was an executive at Pilot Corporation and Saks Fifth Avenue before pursuing public office. Haslam has also served as chair of the Republican Governor’s Association. He and his wife, Crissy, have three children and eight grandchildren, and split their time between Knoxville and Nashville. 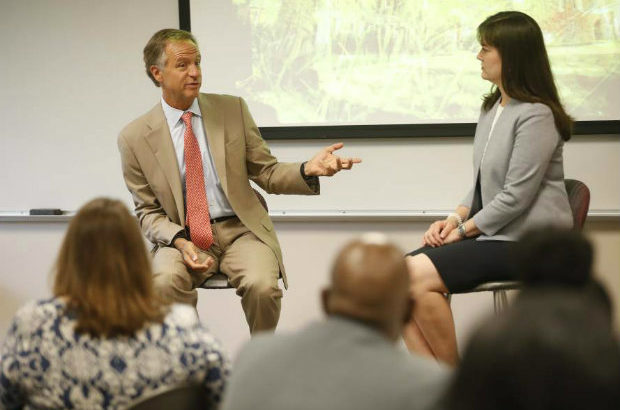 TweetVanderbilt welcomes former Gov. @BillHaslam to the faculty as a distinguished visiting professor of political science.