Scholars are conflicted about the effectiveness of international human rights treaties because often the governments bound by them will nevertheless commit the kinds of acts the treaties are designed to curb. But that view is too narrow, Ritter said.

“The central argument of the book is that we can’t think about how these laws affect just human rights,” Ritter said. “When you think about why governments torture, it’s to control some sort of challenge to their power—to keep dissidents down. So what we really need to do is look at how treaties affect dissent.”

She and her coauthor, Courtenay Conrad of the University of California, Merced, have developed a new theory of treaty effects that looks at the broader ecosystem of power, accountability and conflict in a country. Using 25 years’ worth of data from more than 140 countries, they were able to analyze how each country would behave with or without the influence of the treaty.

“We use conflict to predict which states will repress, and then use predictive modeling to determine what changes about repression and dissent if we add the treaty into the picture,” Ritter said. “And what we’ve found is that the countries that would have repressed the most will repress less than we would expect them to once a treaty is in place.” In other words, even if a treaty doesn’t prevent all human rights violations, it does reduce them.

They calculated a country’s likelihood of repression by examining certain characteristics of leaders—how securely they hold power, how much they personally stand to gain from their power, how long they expect to govern—as well as the sturdiness of a nation’s primary mechanism of accountability—the judiciary. 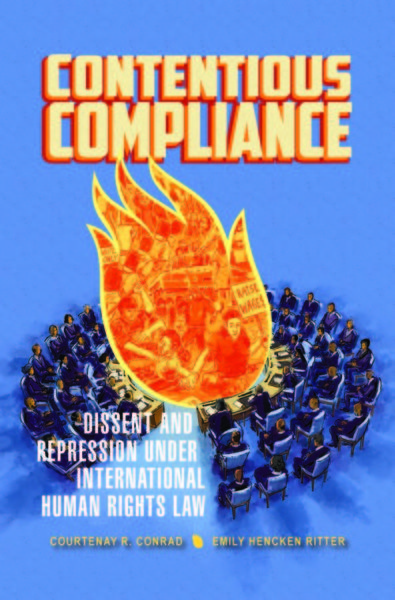 They found that strong leaders with a lot to lose if they leave office and a weak court system to keep them in check were the most likely to repress their people. “In the United States, the president can only hold office for eight years, and we have a strong court system that can check his or her power. So there’s less incentive to repress from that office,” she said. “But in a country with a leader who personally profits from their country’s gold mines or oil industry, a weak court system and no term limits, the incentive to repress is high.”

And those are precisely the types of leaders who end up being most constrained by a treaty—because the treaty alters common expectations of what they can get away with, Ritter said. And their citizens know that.

“Treaties do more than just reduce repression, they also increase protest,” Ritter said. “They create this expectation that the leader won’t repress them if they come out to the streets and so people are demanding more. Treaties make it possible for people to ask for what they need and want—they actually change what people expect from their government.”

Ritter says the takeaway of her research is that international human rights treaties, even if they don’t work perfectly, can still greatly benefit some of the world’s most vulnerable people.