Coming Out as Working Class: Class can be just as isolating as almost any other aspect of identity at a private college

Recently, a colleague asked me what it was like growing up gay in Arkansas. Even I was surprised to find I didn’t have an answer. After all, I should be an expert on that subject—and indeed a couple of the horror stories she no doubt expected to hear are true.

However, as an adolescent, my sexual orientation, dormant as I kept it, wasn’t the reason I felt queer. Right after I hit puberty, my mother and I moved to a university town from a small farm community to escape the aftermath of my parents’ divorce, and in the years that followed she had to work too many hours at too many jobs for too little money to make ends meet. Periodically she entered a depression, and I, in an attempt to prevent it, strove to be perfect.

Though my efforts to stop my mother’s depression failed, as consolation my perfectionism earned me a subsidized spot at Vanderbilt. This rendered my queerness in even starker contrast, since I was now among a student body primarily from the top 20 percent of wealthiest families in the country.

Though I developed many deep friendships in college, the fact of the matter was, I had a set of concerns quite different from those of nearly all my peers. They worried about flawless GPAs and gradations of the Greek system and whether or not their parents would bankroll tropical breaks. I worried about my mom’s financial and emotional survival, and how I was going to get to and from Arkansas, and whether or not I could find an internship that would simply pay.

It wasn’t until later that I would worry about the balance and exorbitant interest rate of the credit card I’d just gotten, because for now, being able to buy dinner off campus or a shirt on clearance without having to do mental math to make certain I could afford it was a relief.

To further complicate my situation, being the first person in my family to eventually finish college, and one of only a few of us to leave Arkansas, I’d now transformed myself into an alien among even my own people.

For years there were these more urgent obstacles of class to navigate before I could afford the luxury of parsing my sexuality. Now that I’m a writer, now that I’m a professor, now that I’m 37 and still happily single—the fact that I’m gay is one of the least queer things about me.

Because I believe in the importance of representation of minorities in the classroom, and because one’s sexual orientation typically isn’t apparent, as a senior lecturer now at Vanderbilt, I often wonder if I should come out to my students at the beginning of each semester.

I envy my LGBT colleagues who are married or otherwise partnered and thus set to reveal this aspect of their identities organically—for example, by simply mentioning what they did over break and with whom. My own necessarily unprompted coming-out likely would land with all the awkwardness of a revelatory sit-down with Mom and Dad, which I never had with my parents.

Recently, though, I realized the same need for representation in the classroom of first-generation college students—representation of those of us from the working class. Across the country such students have higher rates of stress and depression, and lower rates of retention, than their peers. A year ago, in conjunction with the university’s Equity, Diversity and Inclusion office, I met with a contingent of Vanderbilt faculty and administrators and the president of the student body—all of us first-generation college graduates—to discuss how the university might better serve its own first-generation students.

What I was most surprised to learn in that meeting was that nearly everyone present reported that their working-class status had a greater impact on their experience as an undergraduate—for some of them, on their entire lives—than any other aspect of their identity, including race, gender and sexual orientation.

How best then for those of us who’ve risen from poverty to positions of power and influence, positions of financial stability, to help our younger counterparts, those who are struggling to rise themselves? We should make ourselves seen and heard. We should stand before working-class students as concrete examples of where they might go and whom they might become and what they might be. We should come out to them as working class.

I only wish I had started making such bold declarations sooner. If I had, I would have learned in college that I wasn’t alone, that there were other students like me, with my particular concerns—more of them than I imagined. It wasn’t until I started writing about my life that I realized there had been some working-class backgrounds even among my friends. But much in the same way as it was when I was a closeted teen, the latent fear of being perceived as outside the norm—of never being the best simply because of who I am and will never be able to stop being—prevented me from seeing and speaking this truth, too. It prevented me from speaking it even to myself.

When I come out to my students and colleagues as from the working class, I want to expand the idea of who or what a professor is, and I especially hope to give upwardly mobile students—those incarnations of my younger self—the example and language to find one another. To see one another. To be better known to themselves.

Today I can’t help imagining: What if there had been someone at my mother’s tiny, country high school, where there was no college counselor, no one to expose the children of sharecroppers to options after graduation beyond working on a farm or in a factory? What if there had been someone like me, to tell my mother she reminded me of me? To ask her, had she thought about college? Don’t worry, I’d say, you’re good enough. Don’t worry, there’s financial aid. Don’t worry, I’d reassure her, you’ll belong.

A version of this essay was first published in the Nov. 23, 2018, issue of The Chronicle of Higher Education. 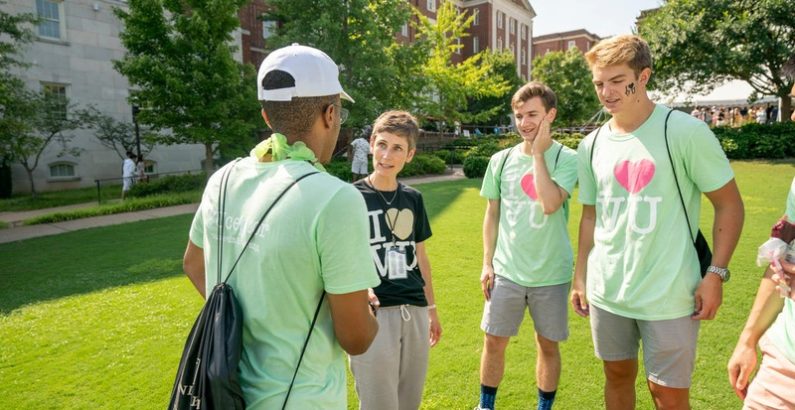 Apply to be an orientation leader, welcome new students next fall