The 43rd president was a guest of Chancellor Nicholas S. Zeppos as part of the Chancellor’s Lecture Series. Jon Meacham, the Carolyn T. and Robert M. Rogers Chair in American Presidency and distinguished visiting professor and biographer of 41st President George H.W. Bush, joined the conversation. 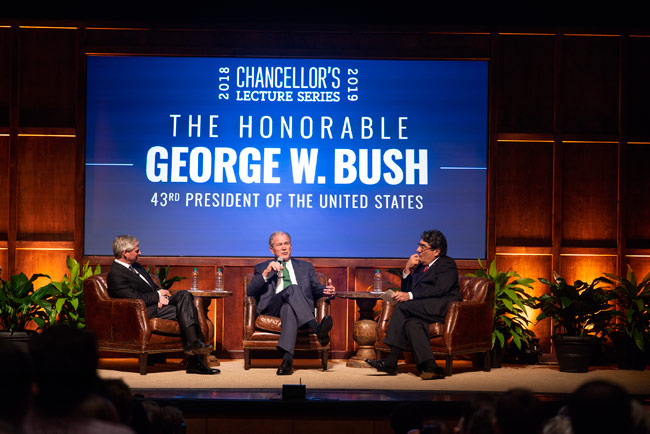 “Take us into the decision-making process on that program,” Zeppos said. “You have said it wasn’t the most popular thing to do, but the right thing to do. When you had to make decisions of that magnitude, who did you listen to, and how did you use their advice? And at the end of the day, how did you own the decisions?”

Bush outlined his 2008 conversations with Treasury Secretary Hank Paulson and Federal Reserve Chair Ben Bernanke and the days spent rounding up support in a Democrat-led Congress.

“Did I want to be the president overseeing the next Great Depression? No,” Bush said. “I didn’t want 20 percent unemployment and Hoovervilles. Once I crossed that threshold of deciding I didn’t want a depression, the decisions were ugly. It meant taking taxpayer money and giving it to people who created the financial instruments who caused the financial crisis to begin with. But it saved our country from a depression.”

Meacham asked Bush to recount his actions in the grim days after the 9/11 terrorist attacks, which included speaking to an ecumenical service at the National Cathedral and to a crowd at the Islamic Center of Washington, D.C., the latter a move many have viewed as a seminal moment in defending religious freedom for Muslims in the United States.

“Democracies are self-correcting. We have so many strengths. We’re leaders in technology and innovation. People ask me, ‘Are you pessimistic?’ No. I am incredibly optimistic about the better days ahead.”

“One of the most beautiful things about America is our right to worship and be an equal citizen,” Bush said. “People, out of ignorance, were starting to attack those who were members of a religion they didn’t agree with. I went to preach religious tolerance, and I’m glad I did it.”

He spoke against isolationism, protectionism and nativism, calling them damaging to America and the world. Bush also struck many lighter notes, bringing the crowd to raucous laughter with anecdotes about his parents, his decision to try painting and his friendship with First Lady Michelle Obama.

He ended with an admonition to stay positive about America.

“Democracies are self-correcting,” he said “We have so many strengths, with educational institutions such as Vanderbilt being among those. We’re leaders in technology and innovation. People ask me, ‘Are you pessimistic?’ No. I am incredibly optimistic about the better days ahead.” 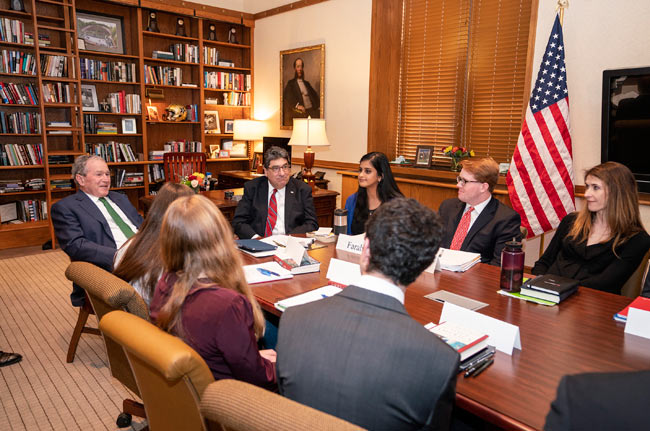 The president’s campus visits included stops at an undergraduate-level class taught by Zeppos and Meacham titled Hours of Crisis in U.S. History and at the Owen Armed Forces Club, which is a group of military veterans earning their master’s of business administration degrees at the Owen Graduate School of Management.

The next Chancellor’s Lecture is set for March 19, when Zeppos will host Stacey Abrams, former minority leader of the Georgia House of Representatives and the first black female gubernatorial nominee of a major U.S. political party.