Would you feel differently about learning your risk for cancer if there were a 5 percent chance of your genetic information being leaked? That was the opening question posed by Dr. Siddhartha Mukherjee, an oncologist and preeminent science communicator, to the large audience attending the Vanderbilt Chancellor’s Lecture Series on Thursday evening.

“There is a desire to understand our bodies and our future bodies, but it comes with serious thoughts about surveillance, about not being able to control the information within us that disturbs us,” said Mukherjee, who addresses similar themes in his latest book, The Gene: An Intimate History.

Chancellor Nicholas S. Zeppos introduced Mukherjee before his talk at Langford Auditorium and followed up with several questions after the Pulitzer Prize-winning author spoke. Zeppos noted that Mukherjee’s achievements as a writer and educator build upon his exceptional career as a leading cancer physician and researcher. Mukherjee serves as an associate professor of medicine at Columbia University and as a staff cancer physician at Columbia University Medical Center.

Mukherjee’s presentation, “From AI (artificial intelligence) to GI (genomic intelligence),” began with a broad overview of the history of genetics from the pioneering work of Gregor Mendel to today’s advances, which Mukherjee describes as “the capacity to read and write genetic information in ways that we have never been able to do before.” He warns that while gene therapies have provided great benefits in the fight against diseases ranging from cancer to cystic fibrosis, there are extensive ethical issues that accompany new discoveries.

“There is no moment more acute than now as we enter this ‘reading and writing’ phase of our own genetic information,” Mukherjee said. “I cannot emphasize the importance of these ideas circulating across vast public spheres before we start doing the unthinkable—which is reaching out for our own genomes and the stewardship of our own genetic information and opening it to being read and written in this fundamental way.”

During the Q&A, Zeppos asked about the ethical implications of future scientists having the ability to determine which diseases should be completely eradicated. Mukherjee noted that he touches on this issue in his most recent book.

“A disease is defined as a disability in a context,” Mukherjee said. “But that means there are two parts of the equation: a disability and the context. If you change the context, suddenly that which was a disease becomes a ‘non-disease,’ as it were.” Mukherjee gave the example of attention deficit disorder. He said that the argument could be made that having a very rapidly moving attentive target could be advantageous in some jobs and circumstances.

Zeppos concluded the discussion by asking Mukherjee about an issue he wrote about that attracted significant controversy—medical profession burnout in the rapidly changing environment of health care. Mukherjee answered by giving the example of a family physician who is devoting a portion of his practice to middle-aged HIV survivors. ”This doctor reinvented himself as someone who made a commitment to study that population,” Mukherjee said. “He found meaning and mastery and rejuvenated his own life. The onus lies on us partially to constantly invent ourselves through that meaningful process.”

The next Chancellor’s Lectures Series speaker will be Temple Grandin, an autism activist, prolific author and professor of animal sciences at Colorado State University, on Nov. 29. 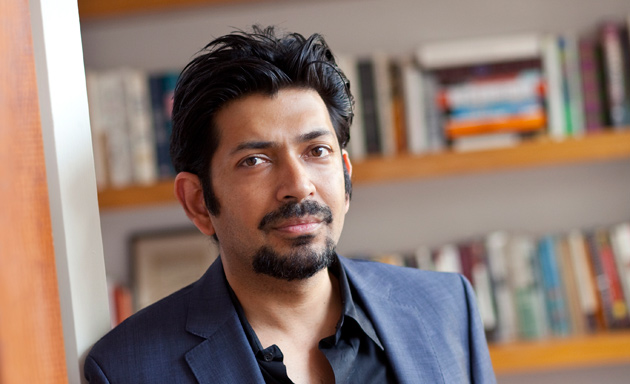