The Asian Studies and Cinema and Media Arts programs will present a special film series on the works of Korean director Kim Jee-Woon Oct. 25-26

The International Lens series will screen A Bittersweet Life and host a post-screening Q&A with the director on Thursday, Oct. 25, at 7:30 p.m. in Sarratt Cinema.

A workshop with the director is scheduled for Friday, Oct. 26, beginning at 1 p.m. in Buttrick Hall, Room 103. This event is RSVP only.

A roundtable discussion, “Good, Bad, Weird Cinema: The Aesthetics of New Korean Cinema,” will feature the director on Friday, Oct. 26, at 4 p.m. in Wilson Hall, Room 103.

The 2005 neo-noir film A Bittersweet Life follows a betrayed hitman as he wades into the criminal underbelly of Seoul. A landmark in Korean genre film, Kim’s fourth feature effortlessly combines virtuosic action, cutting humor and abundant style. The film’s lasting cultural impact speaks to its status as a high point in contemporary Korean cinema. The screening and Q&A are free and open to the public.

For the workshop, Kim will visit ASIA 3892 to talk one on one with class members and Cinema and Media Arts majors, answering their questions about the subject of his films, his filmmaking process, themes, craft and more. The event is RSVP only.

The roundtable, “Good, Weird, Bad Cinema: The Aesthetics of New Korean Cinema,” will engage in an open conversation on the aesthetic characteristics of and inspirations for Kim’s works, the place of Korean films within the larger fabric of global cinema, and the shifts and changes that have been occurring in Korea’s film industry and viewership in recent years. The event is free and open to the public. It will be followed by a short reception.

This film series commemorates the launch of Korean Studies at Vanderbilt and is sponsored by a special grant from the Korea Foundation. 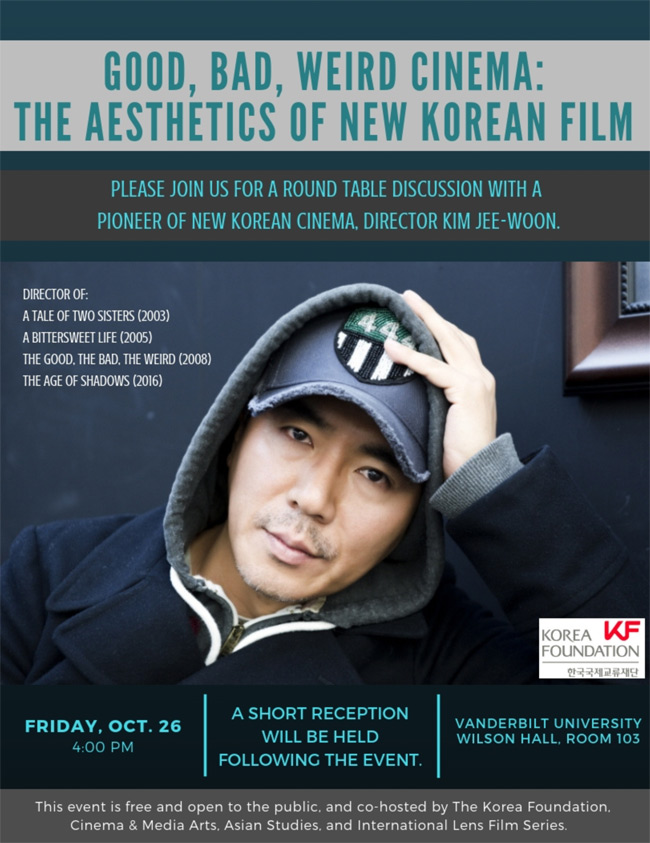