In the annals of American sports writing, there is no more hallowed figure than Vanderbilt alumnus Grantland Rice.

Known for his elegant prose, Rice penned works during the first half of the 20th century that were published in newspapers and broadcast on radio around the country. By his own estimate, over his half-century career, he wrote more than 22,000 columns, 7,000 sets of verse and over a thousand magazine articles.

He also was friendly with the leading sports figures of the day, including baseball great Babe Ruth, famed boxer Jack Dempsey and golfer Bobby Jones, co-founder of the Masters Tournament.

But before he was “dean of sportswriters” during sports’ golden age, he was “Granny” Rice born in Murfreesboro, Tennessee. He attended Montgomery Bell Academy in Nashville and then Vanderbilt University, where he lettered in football and captained the baseball team.

Rice is the subject of a new documentary premiering Sept. 25 on the SEC Network. Filmed in part on the Vanderbilt campus last year, By Grantland Rice traces his formative years at the university, from which he graduated with a degree in classics in 1901.

It was on the playing field at Vanderbilt that Rice forged his insight into the heart and mind of an athlete, and in the classroom that he began to develop his evocative, heroic writing style.

Among Rice’s most famous works is “Alumnus Football,” which he wrote for a gathering of the Vanderbilt Alumni Association in 1908. The poem ends with the oft-quoted lines: “For when the One Great Scorer comes to mark against your name, He writes—not that you won or lost—but how you played the Game.”

Rice also is known for famously dubbing the backfield of the 1924 Notre Dame football team the “Four Horsemen” of Notre Dame, a biblical reference to the Four Horsemen of the Apocalypse. His New-York Tribune account of the Notre Dame vs. Army game played at New York City’s Polo Grounds in 1924 elevated the event to a level far beyond that of a mere football matchup.

After graduating from Vanderbilt and taking early jobs with the Atlanta Journal and the Cleveland News, Rice became a sportswriter for the Nashville Tennessean. He later held a series of prestigious jobs with major newspapers in the Northeast. In 1914, he began his “Sportlight” column in the New-York Tribune and provided monthly “Grantland Rice Sportlights” as part of Paramount newsreels from 1925 until 1954, the year of his death.

In 1956, the Thoroughbred Racing Association–Grantland Rice Memorial Scholarship was established at Vanderbilt to provide scholarships based on academic merit to undergraduates in the College of Arts and Science with an interest in a career in sports journalism. The scholarship was renamed and endowed in 1986 by Charles J. Cella to additionally honor alumnus Fred Russell, a protégé of Rice and longtime sportswriter and editor of the Nashville Banner.

The Fred Russell-Grantland Rice Scholarship in Sports Journalism is awarded at Vanderbilt annually. Past recipients include author and humorist Roy Blount Jr., Fox Sports personality Skip Bayless, Sports Illustrated writer Lee Jenkins and Strong Inside author Andrew Maraniss. The scholarship’s first recipient, Charles Nord, as well as Cutler Klein, the most recent recipient at the time of the documentary’s filming, were interviewed for the film.

By Grantland Rice, directed by Joe Lavine for the SEC Storied series, airs Tuesday, Sept. 25, at 8 p.m. on the SEC Network. 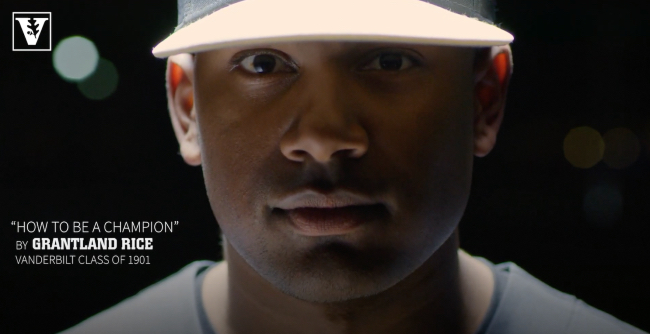 Watch: ‘How to be a Champion’