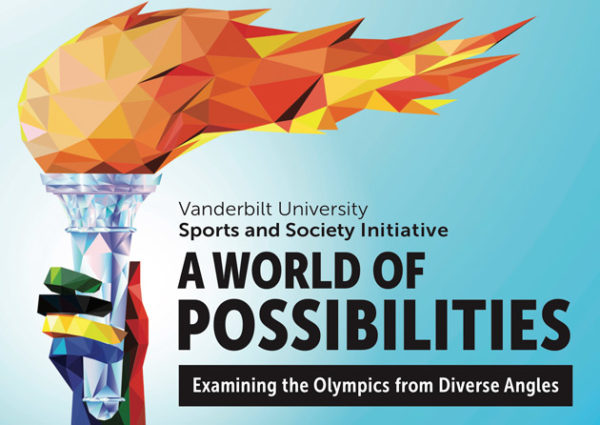 Vanderbilt University’s Sports and Society Initiative has announced a new series for the 2018-19 academic year, “A World of Possibilities: Examining the Olympics from Diverse Angles.” The series encompasses 14 thought-provoking, educational and entertaining events, including film screenings, panel discussions and presentations by scholars, journalists and authors.

“This series will provide our community with the opportunity to engage in critical dialogue around the complex issues at the intersection of sports and society. Universities play an important role in the fight for justice and equality, and Vanderbilt is dedicated to supporting research, teaching and scholarship that promotes true progress in this area,” said David Williams, vice chancellor for athletics and university affairs and athletics director.

The series kicks off with “The Literature of the Olympics” on Tuesday, Aug. 28, from 11:30 a.m. to 1 p.m. in the Community Room of the Jean and Alexander Heard Library. This program will feature an introduction to the series by Williams, and Vanderbilt Librarian Pam Morgan will present ways to use library resources to access Olympics-related books, journals, movies and archives that correspond to each program in the series. This program, along with all subsequent programs in the series, is free and open to the public.

The series launches on the 50th anniversary of the 1968 Olympics, the venue for an iconic moment in sports history when Tommie Smith and John Carlos—who placed first and third, respectively, in the 200 meters—raised their black-gloved fists skyward in protest during the playing of the U.S. national anthem during the medal presentation. Programs throughout the Vanderbilt series will highlight historic moments and figures such as this and provide a forum to engage in discussion on the relationship between sports and society.

“The wide range of programs, speakers and experiences being offered through this new series will appeal to both the sports enthusiast and the casual observer,” Williams said. “This series is centered on illuminating the ways in which the Olympics intersects with society, and the programs will offer valuable insights into culture, politics, social justice, race, gender, religion and more.”

The Sports and Society Initiative, established in January 2018, intends to elevate awareness and understanding of the ways in which sports and society impact each other across a variety of disciplines. In addition to Vanderbilt launching this new series, the Office of the Provost recently created a micro-grant program designed to advance research, teaching and scholarship exploring the connection between sports, race, gender and culture in society.

All programs are free and open to the public. Upcoming programs in the series include:

“A World of Possibilities: Examining the Olympics from Diverse Angles,” is sponsored by Community, Neighborhood and Government Relations, the Osher Lifelong Learning Institute at Vanderbilt, the Robert Penn Warren Center for the Humanities and Vanderbilt Athletics.

For more information about the Vanderbilt University Sports and Society Initiative and its new series, please visit Vanderbilt.edu/sportssociety.