The Climate Change Gap: Government alone cannot slow global warming. The private sector must do its part as well.

By Michael Vandenbergh and Jonathan Gilligan

During the past three decades, discussions about climate change have focused almost entirely on government responses, such as comprehensive international agreements, taxes on fossil fuel emissions, and power plant regulations.

As the 2016 presidential election demonstrated, though, it is dangerous to put all our policy eggs in one basket. In June 2017, just a few months after taking office, President Donald Trump announced that the U.S. would be withdrawing from the Paris climate accord—an agreement negotiated by roughly 200 countries in 2015 to combat climate change, primarily through the reduction of greenhouse gas emissions.

After the announcement of the withdrawal (now officially slated for 2020), many of the remaining countries have stepped up their commitments, but a sobering fact endures: Even if all the participating nations do their part, governments alone cannot substantially reduce the risk of catastrophic climate change.

In our book, Beyond Politics: The Private Governance Response to Climate Change (2017, Cambridge University Press), we argue that the private sector has a critical—and perhaps essential—role to play. What is needed is a concerted effort to mobilize private action—not just corporations but also religious and civic organizations, colleges and universities, investors and households—to help narrow the gap that remains after the Paris agreement. 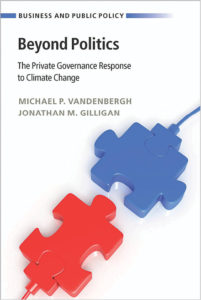 Under current policies, global emissions are on a path toward a world with temperatures more than 3 degrees Celsius (5.4 degrees Fahrenheit) above preindustrial temperatures. The Paris agreement emphasizes the need to keep warming “well below” 2 C and ideally reach a reduction of 1.5 C. The accord includes national pledges to reduce emissions, which are to be updated every five years to move the world closer to the temperature target.

Although the agreement takes a significant first step, without additional steps the world will fall far short of even the more modest goal. This is the “Paris Gap”—the difference between the goals of the Paris agreement and what it will actually achieve over the next decade, even if all countries fully comply with their commitments. A detailed scientific assessment by the PBL Netherlands Environmental Assessment Agency found that by 2030 this gap would reach 12 to 14 billion tons of carbon per year even if all countries, including the U.S., meet their targets.

The Paris agreement sets up a process for countries to add new commitments for the period after 2025, but here is the catch: The Paris Gap is so large that waiting until then brings risks. Although no one can predict all the effects of a global temperature increase of 3 C or more, an increase in this range will almost certainly amplify the frequency and severity of deadly heat waves around the world. It also will increase the likelihood of crossing tipping points that could make the consequences of climate change, such as sea-level rise, much worse. Waiting a decade for additional national commitments is a risky option.

So how should we close the Paris Gap? We believe corporations, nonprofits and citizens can make an important contribution, even if they cannot solve the entire problem. In fact, our assessment finds that private actions can close 10 to 30 percent of the Paris Gap during the next decade.

WHAT ORGANIZATIONS CAN DO

A common view of corporations is that they are simply profit-seeking organizations that will reduce emissions only if government requires them to do so. But these profit-driven motivations can actually induce corporations to reduce carbon emissions on their own. Resource efficiency, pressure from retail and corporate customers, pressure from investors and lenders, employee morale and regulatory avoidance all affect the bottom line.

Some of the ways corporations can reduce emissions are to limit deforestation, increase renewable energy use, and improve the energy efficiency of their buildings. Efficiency efforts are particularly attractive because they often pay for themselves on a short timeline. To give just one example, global manufacturer Siemens expects its recent $110 million efficiency investment—which includes the installation of solar panels in its plants and the purchase of more fuel-efficient vehicles for its employees—to repay itself in five years, after which it will continue to produce $20 million of savings per year.

Meanwhile, nonprofits, such as churches, colleges and universities, hospitals and civic organizations, also are starting to get in on the effort to close the Paris Gap, but they can do more. For example, the Catholic Church operates roughly 70,000 buildings in the U.S., including some 2,000 health care facilities, 5,300 elementary schools, 1,200 secondary schools, 250 higher education institutions and 17,000 churches. Based on our calculations, these properties emit roughly 40 million metric tons of carbon dioxide per year, or the equivalent of the annual emissions of Switzerland. If the church and organizations like it committed to the same efficiency measures some corporations are implementing, they could make a significant difference on their own.

WHAT INDIVIDUALS CAN DO

Household electricity use and personal motor vehicle use account for roughly a third of U.S. carbon emissions. But with simple changes to people’s behavior, those emissions could drop by an estimated 20 percent by 2020. That is a reduction of 450 million metric tons of carbon dioxide—an amount equal to the total annual emissions of France.

In our book we identify 17 actions that people can take to reduce emissions in their daily lives. They range from ones requiring new household investments (e.g., the purchase of more efficient home appliances, motor vehicles and heating and cooling equipment) to others that do not cost anything to implement (e.g., more efficient driving, better home thermostat use, and lower laundry temperature settings). We also quantify the potential impact of each action, were it to be adopted on a national scale.

In addition to these action items, we dispel some common misconceptions that lead to wasted energy, such as the idea that idling one’s car engine is preferable to turning it on and off or that hot water is necessary to kill germs when washing hands. In the case of the latter, research shows that using warm or hot water has minimal, if any, hygienic benefits. And yet the use of elevated temperatures for hand-washing persists across the U.S., accounting for 68 trillion kilojoules of energy and roughly 6.3 million tons of carbon dioxide each year.

The private climate governance strategy does not offer a solution to the climate problem, but it does offer an opportunity to narrow the size of the Paris Gap, reducing global emissions by roughly a billion tons of carbon dioxide each year during the next decade.

This will require overcoming not only the 50-year history of treating environmental policy as a matter for governments alone to handle, but also a greater awareness of the importance of many nontraditional emissions sources and of our vocabulary, which pushes us to assume that the response to a problem must “solve” it and that government is the only actor that can do so.

Ultimately, the greatest challenge to reducing emissions with private governance is conceptual—a failure of imagination by policymakers and social entrepreneurs of all types—not the physical limits of emissions reductions, the economics of corporate decision-making, or the psychology of household energy behavior. If the full opportunity is to be seized, opinion leaders will need to recognize it and understand why it is worth pursuing, both on a large scale through corporations and nonprofits and in the individual daily lives of citizens.

This story is adapted from Beyond Politics: The Private Governance Response to Climate Change and an opinion piece that appeared online in The Conversation.

Michael Vandenbergh is a David Daniels Allen Distinguished Professor of Law and director of the Climate Change Research Network, an interdisciplinary research initiative affiliated with the Vanderbilt Institute for Energy and Environment. Jonathan Gilligan is an associate professor of Earth and environmental sciences and of civil and environmental engineering. 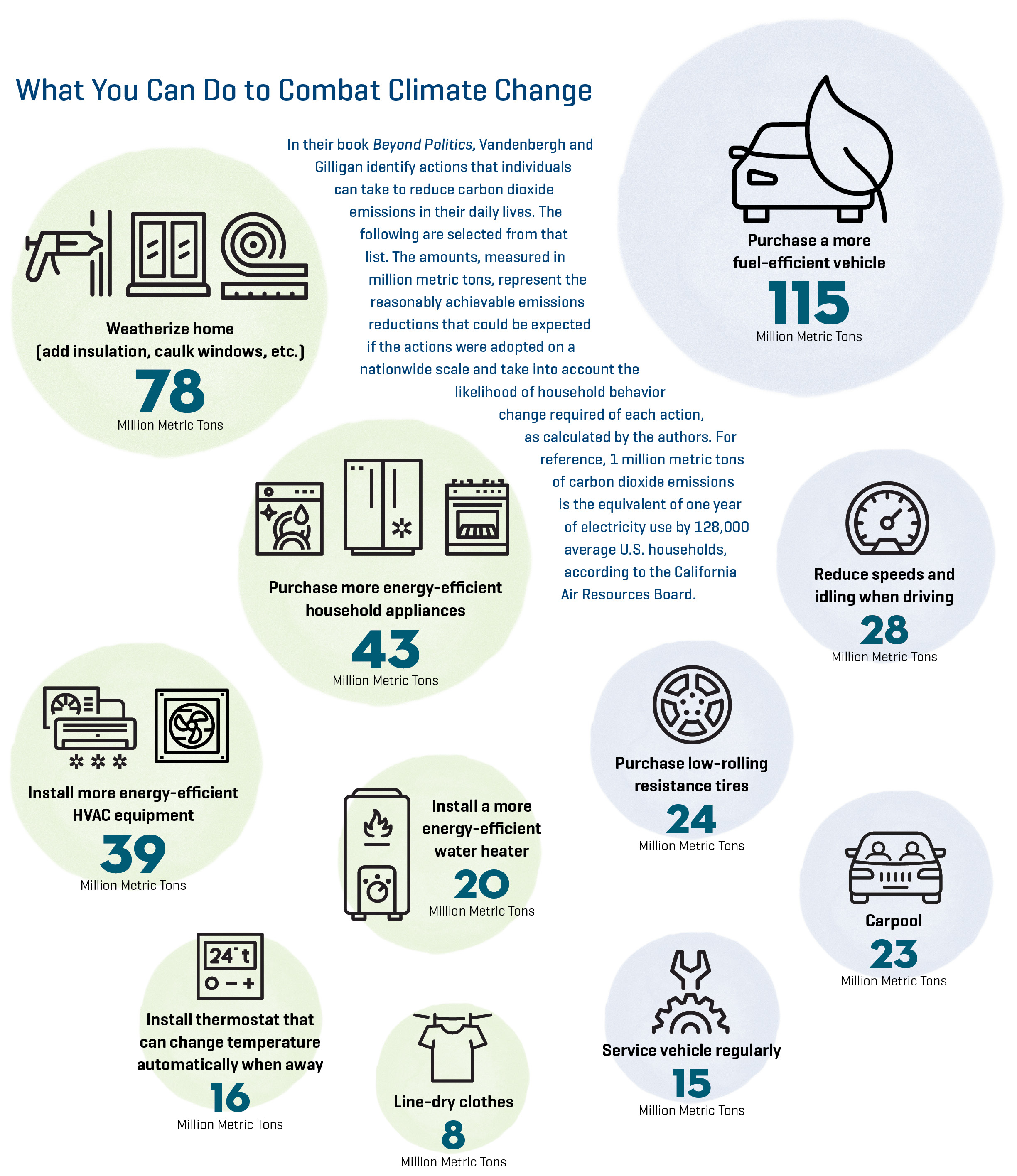