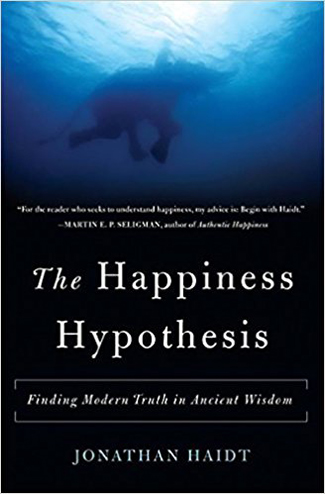 The Commons Reading for the 2018-19 academic year will be The Happiness Hypothesis: Finding Modern Truth in Ancient Wisdom by Jonathan Haidt. Provost and Vice Chancellor for Academic Affairs Susan R. Wente and Vanessa Beasley, dean of The Martha Rivers Ingram Commons, announced the selection March 26.

An annual tradition, the Commons Reading is a book sent to incoming first-year students the summer before they arrive on campus. The reading is discussed on The Ingram Commons and across campus during the students’ Vanderbilt Visions groups and in other contexts.

“The discovery, discussion and self-reflection sparked by the Commons Reading are an integral part of helping first-year students get acclimated to Vanderbilt’s vigorous scholarly community,” Wente said. “This year’s reading will challenge them to explore big ideas and consider new concepts, and to contribute to the intellectual life of the university.”

Published in 2006, The Happiness Hypothesis poses several “great ideas” on happiness espoused by thinkers of the past—from Plato to Buddha to Jesus and others—and examines them in light of contemporary psychological research, extracting from them lessons that still apply to our modern lives. Central to the book are the concepts of virtue, happiness, fulfillment and meaning.

Haidt, the book’s author, is an award-winning psychologist whose research focuses on morality—its emotional foundations, cultural variations and developmental course. He currently serves as the Thomas Cooley Professor of Ethical Leadership at New York University’s Stern School of Business.

“Fundamental to our philosophy at The Ingram Commons is an appreciation for intellectual growth as well as self-discovery within a diverse community. The Commons Reading provides a shared context in which to do that,” Beasley said.

“The Happiness Hypothesis will help our students extend a dialogue we have been having about wellbeing and mental health. Likewise, given Vanderbilt’s frequent designation as having the ‘happiest students,’ we can use this book to talk about the range of things happiness might mean to each one of us, how those definitions can change across time and cultures, and how being happy doesn’t mean acting as if everything is good or fine all of the time. I’m looking forward to developing opportunities on The Ingram Commons and within the broader university to have these conversations,” she said.

The selection process for the 2018-19 Commons Reading was largely driven by a committee of Vanderbilt faculty members who serve as VUceptors—the mentors who, along with a student VUceptor partner, facilitate small-group discussions among first-year students using the Vanderbilt Visions curriculum during the fall semester.

“Haidt’s book gives its readers access to philosophy, religion and history in a matter-of-fact, yet highly informative, style of writing,” said Gilbert Gonzales, assistant professor of health policy and chair of the selection committee. The book covers a variety of topics that align well with the Vanderbilt Visions curriculum, he noted.

“From a more distant perspective and through ancient wisdom, The Happiness Hypothesis will guide students gradually and steadily in their attempt to explore their values, spiritual foundation, cultural background and role in society,” Gonzales said. “We hope first-year students can borrow lessons from ancient wisdom and modern science to pursue happiness here at Vanderbilt and throughout their lives.”