The Reality TV President: Is Trump’s behavior changing the office of the president?

On Feb. 6, Pulitzer Prize winner Jon Meacham, a No. 1 New York Times best-selling presidential biographer and visiting Vanderbilt distinguished professor of political science, sat down with Chancellor Nicholas S. Zeppos to discuss Donald Trump’s first year in office. The conversation was recorded for the Zeppos Report podcast and is presented here in a condensed, edited form.

ZEPPOS: Let’s start with the president’s first year. Is “unorthodox” how you’d describe it? Do we need to nest him in some sort of historical context before we can say there’s never been anything like this before?

MEACHAM: I think Trump’s presidency is unprecedented in its unorthodoxy in tone and culture, but it’s a fairly orthodox Republican administration. I don’t think another Republican actually would have ruled in substance much differently.

One of the things about Trump is it’s damn near impossible to separate the style from the substance. Whether you find him repellent or refreshing, his style is undeniably fascinating and even entertaining. He’s compulsively watchable.

I don’t think we know exactly yet how we’re going to look at him. My own view is that his attempts to associate himself with Andrew Jackson are understandable but not particularly convincing. I mean, 180 years later it’s hard to make that point in any event.

To me, [Special Counsel] Robert Mueller and the possibility of a Democratic House later this year are the two great questions. My friend Gene Robinson, the Washington Post columnist who’s been here as part of your lecture series, said about Trump and Russia that it’s as though you were pulled over by a cop for speeding and you say, “OK, officer, of course, write me a ticket, but whatever you do, don’t look in the trunk.” At every point Trump says, “Don’t look in the trunk.”

NZ: He might say, “I can’t govern with this sort of undermining of the office of the president.” Nixon never had the chutzpah to make the argument that I think Trump will make, which is: I really can’t obstruct because I’ve got to get this out of the way to make America move forward. It’s just a distraction. There seems to be a kind of conflating of his wellbeing and stature with what’s good for America.

JM: That’s well put because he doesn’t believe in, and is not part of, any institution that doesn’t have his name on it. As Emerson said, there’s properly no history, only biography. If that’s the case, then you have a man who made some amount of money turning himself into a brand. So, he’s not a leader of a party. It’s a cult of personality.

NZ: How divided is the country? How would you compare what is happening now to, say, the Vietnam War era? And do you think Trump has strategically amplified our divisions?

JM: Fifty years ago there was violence in the streets. Forty-eight years ago there were the shootings at Kent State. Remarkably, about 50 U.S. servicemen were killed every day in 1968. Every day.

Steve Bull, who used to work for Nixon, told Clara Bingham, a Vanderbilt parent and mutual friend, that one of the reasons the Nixon White House spun out of control was they genuinely believed they were on the precipice of revolution. We are missing that element now. 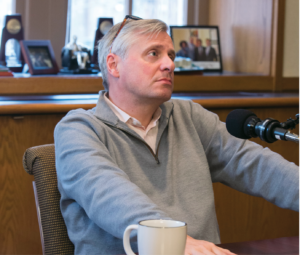 I’ve been very skeptical of the idea that we’re so divided now because this is a recurrent thing. In the 1930s FDR said the two most dangerous men in America were Huey Long and Douglas MacArthur because Long could lead a revolt from the left and MacArthur from the right. But I do think that the media exacerbates it in the way that the media exacerbated it in the 19th century.

I think we’ve proven that, in terms of the press, the 20th century was the exception, not the rule. In 1896, after buying The New York Times, Adolph Ochs needed a position for the paper because there were 40 other papers in New York that all had political dispositions. So he said, “I’ll just go up the middle,” and that worked. It helped in broadcasting because of the Fairness Doctrine. Until 1986 that meant you had to at least feign neutrality—or if you expressed an opinion, you had to give the other side equal time.

The repeal of that led directly to the rise of talk radio. Rush Limbaugh went national in 1988, and by ’92 he was supporting Pat Buchanan in challenging George Bush. That helped open the way for Ross Perot, the first insurgent billionaire. And we’ve seen another one since.

NZ: There have been several dynasties in politics—the Kennedys, Bushes, Clintons. Has Trump demolished the notion that there can be these established families and handovers of power? Or are we maybe going to see him try to develop a dynasty of his own? And are others now trying to leverage entertainment into dynastic family authority?

JM: There were nine presidential elections between 1980 and 2016. Seven of those nine tickets had either a Bush or a Clinton on them. I don’t think there’s any doubt that Trump’s success in part is about a subconscious rebellion against an establishment embodied in many ways by those two families. It’s not causal but correlative that in those 36 years was the period when wages and household income began to stagnate and fall. It was a kind of perfect storm in 2016.

Will it return? Whenever someone asks me to predict something, I say, “Let’s just be clear: Donald Trump is president of the United States. So what the hell do any of us know?”

Will this create an “Oprah Effect,” where a pre-existing fame short-circuits the ordinary channels of presidential politics? That’s certainly possible. Or will it create a backlash that opens the way for a very traditional senator or a governor? 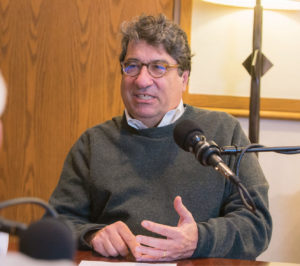 NZ: You’ve referred to Trump as the first reality TV president. You can see this every day with how he moves the news cycle and uses Twitter for provocative statements. Do you think this behavior is changing the office of the president?

JM: I think future presidents will have to have an authentic presence on social media, in whatever form it takes. The tweets have created an apparent transparency, and if future presidents try to have a press office do it, people will know. That, I do think, has changed.

It also depends on how this administration ends. If this ends in impeachment and conviction because he’s been on the Russian payroll for 20 years, then there’s a complete backlash. If it ends in seven years with a moderate uptick in household income and three conservative Supreme Court justices from the Federalist Society website, then the tools by which he governed will stay in the kit.

NZ: But you’ve got to have the person who actually can pull it off, right? It’s more than just the toolkit.

JM: You know, Mrs. Obama had a marvelous line, which is that the presidency doesn’t change you. It magnifies who you are. And that’s a very interesting filter with which to look at these folks, and it’s certainly true of the postwar crowd.

I’m putting together a little anthology called The Presidents on the Presidency that takes everything from their memoirs and conversations about what they themselves said about the office. When asked what makes a great president, Truman said no one would’ve thought he was going to be one. He said you don’t know what a person is going to do until they get to a place of responsibility. Some people grow, some people don’t. And there were those who thought there’d be a Trump pivot. Not true. One of the things I find fascinating about political office is you’d better have every bit of intellectual capital you can before you go into it because the presidency is almost impossible.

Ronald Reagan is a good example here. A lot of people thought Reagan was, as he once put it, a combination of the Mad Bomber and Ebenezer Scrooge. But actually, his most interesting formative professional experience besides Hollywood had been his work as a union president and cutting deals all those years. If we looked at him that way, we would’ve seen that it was not impossible to have what happened happen, which is to go from evil empire to literally playing with babies in Red Square. And he won 49 states. Can you imagine today a presidential election in which 49 states agree on something?

NZ: You wrote a recent piece in The New York Times in which you said history suggests that the means of Trump’s rise could be the means of his undoing. Could you just dive a little bit further into the connection? 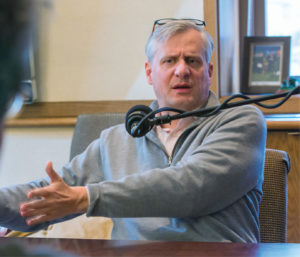 JM: My own view is that Trump is too exhausting, and at some point the public attention is filled up too far. FDR said that there’s something in the public consciousness that resists hearing the highest note in the scale all the time. People get tired of seeing the same name in the headlines and hearing the same voice on the radio. Eisenhower said he couldn’t imagine anything more boring than for people to spend half an hour listening to him talk.

Trump doesn’t understand that. One of the most interesting things reported last year by The New York Times was that during the transition, Trump told the White House staff that they should treat each day of the presidency as an episode of a TV show in which he vanquishes his enemies. It’s sort of Hobbes meets WWF. There’s a limited capacity for the public to live with a war of all against all, all the time. I’m paid to pay attention to this, and I can’t remember who is attacking whom from hour to hour.

NZ: Russia is obviously very much on everyone’s mind, but has Trump really faced a crisis yet?

JM: Not yet. The closest thing is North Korea or Syria. George W. Bush really became president—however you feel about how he widened the war beyond Afghanistan two years later—when he was standing down at Ground Zero. It’s a fascinating clip to watch because he’s losing the crowd at first, but then there’s the great bullhorn moment.

NZ: Do you see the other branches of government meeting their constitutional responsibility in terms of checks and balances?

JM: I think the courts are, particularly the Ninth Circuit. Where Trump was about to drive us off the road with immigration, I think the courts have stepped in. Congress is trickier because the problem is the Republican majorities actually agree with him. You and I both know senators who say privately that this guy is a loose cannon and is dangerous. But the nature of the Republican voter right now is such that you stand up to this guy either when you’ve decided not to run for re-election or you’ve been diagnosed with a fatal illness. Flake, Corker, McCain. You’d hope that there would be those who’d see the portrait of Daniel Webster and at least think about whether they’d be considered for Profiles in Courage if it were updated.

NZ: I know you’re a historian, but you’re also a decent prognosticator. Is it too early to talk about the midterms, Jon? 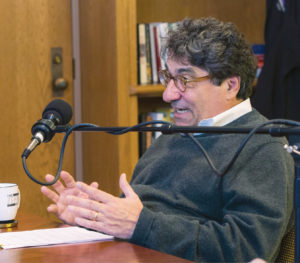 JM: I would be surprised if the House doesn’t flip, and I wouldn’t be stunned to see the Senate flip. I think there’s a great race [in Tennessee]. I mean, Bredesen versus Blackburn is a canary in the mine shaft. Marsha Blackburn has been an early and vocal Trumpite. Phil Bredesen, the former Democratic governor, is not the jazziest of public figures. But I think what he’s going to bet on is that we have plenty of jazz and it’s time for serious people.

NZ: Jon, thank you for joining me today. It’s an honor to have you here at Vanderbilt.

Listen to all podcasts of The Zeppos Report.