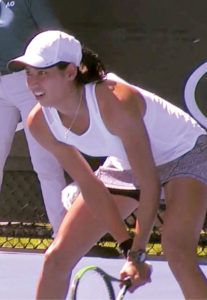 Astra Sharma, a redshirt senior on the women’s tennis team, lived out a dream of many aspiring tennis stars in January when she competed in her first-ever Grand Slam. The Perth, Australia, native teamed up with University of Florida alumna and fellow Australian Belinda Woolcock in the main draw of the Australian Open doubles tournament, which was held at Rod Laver Arena in Melbourne. Competing in front of friends and family, the duo faced off against the tournament’s 12th-seeded pairing of Raquel Atawo and Anna-Lena Groenefeld in the first round. Sharma and Woolcock took an early 2-0 lead but ultimately lost the first set in a tiebreaker and went down in the second set 6-3. Said Vanderbilt Head Coach Geoff Macdonald, who attended the match, “I’m so proud of her. To play a Grand Slam in your home country is an honor and an achievement. … Many more to come!”