More than eight in 10 adults in Mexico and Central America believe climate change is a very serious problem for their country, more than twice the proportion of adults in the United States and Canada, according to a newaccording to a new “Insights” report from Vanderbilt’s Latin American Public Opinion Project (LAPOP) titled “Education and Risk Assessments Predict Climate Change Concerns in Latin America and the Caribbean.” Elizabeth Zechmeister, LAPOP’s director and Cornelius Vanderbilt Professor of Political Science, and graduate student Claire Evans wrote the report.

“Climate change is a highly politicized and partisan issue in the United States, and we wanted to examine whether that is a common characteristic of this issue in other countries in the region,” said Zechmeister. “If not politics, then what predicts attitudes about climate change in these other places?”

Using data collected from LAPOP’s 2016-17 AmericasBarometer survey, Zechmeister and Evans analyzed responses to the question: “If nothing is done to reduce climate change in the future, how serious of a problem do you think it will be for [country]?”

The United States and Canada trailed their neighbors considerably, with just 39.6 percent saying unchecked climate change was a “very serious” problem. However, a much larger proportion of adults in these areas considered it a “somewhat serious” issue—35.4 percent. 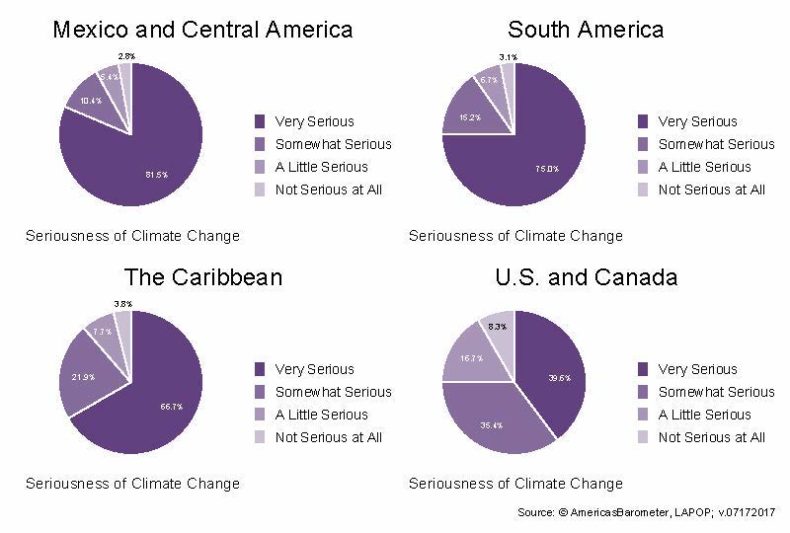 The findings confirmed the researchers’ hypothesis that climate change is a much more partisan issue in the United States than it is anywhere else in the hemisphere. Identifying as a liberal in the U.S. is associated with a 16.7 percent increase in climate change concern compared to political centrists, while identifying as a conservative is associated with a 25 percent decrease in concern.

South of the U.S. border, however, concern is quite high across the political spectrum, with almost no difference in concern between centrists and liberals, and only a slight reduction in concern among conservatives.

Zechmeister and Evans say this broad consensus about the seriousness of climate change in Latin America and the Caribbean suggests that government policies and programs to mitigate climate change could be well supported by the populations in those nations.