When it comes to their views on public policy, Tennesseans are more moderate than many expect, according to the latest Vanderbilt Poll released on Thursday.

These findings, in general, suggest that Tennessee in 2018 could prove to be an important bellwether for the state’s and country’s future—a claim that is consistent with Doug Jones’ surprise win in the Alabama special election on Tuesday, said John Geer, Gertrude S. Conaway Professor of Political Science.

“What’s fascinating about the 2018 elections is that you’re going to witness a battle on two fronts,” Geer said. “One is whether the Democrats can be viable statewide in light of the Dean and Bredesen candidacies. Might we see the Democrats win the governorship, the open Senate seat, or both? The other battle is for the soul of the Republican party. Is the Tennessee GOP still the party of Howard Baker or has it become the party of Steve Bannon?”

The Vanderbilt Poll is sponsored by Vanderbilt’s Center for the Study of Democratic Institutions, which Geer co-directs with Josh Clinton, Abby and Jon Winkelreid Professor of Political Science. Between Nov. 16-Dec. 5, the poll surveyed a representative sample of 1,013 registered Tennessee voters on a variety of state and national issues. The poll’s margin of error is ±3.7.

“Conventional wisdom says that Tennessee is a ruby-red state, but the data from the Vanderbilt Poll does not always square with such a claim,” Geer said. “When we asked Tennesseans to characterize their fellow citizens’ ideological leanings, 62 percent believe their fellow Tennesseans to be conservative or very conservative. Yet when you ask these same people to rate their own ideological leanings, just 48 percent describe themselves that way.”

In other words: There is a 14-point gap between perception and reality. In fact, the state is evenly balanced between conservatives (48 percent) and those who identify as moderate (31) or liberal (17). 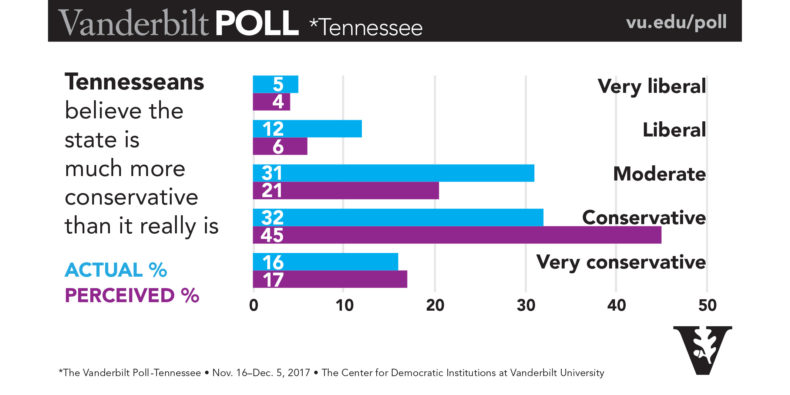 “There is a dramatic over-estimation of how conservative the state is,” said Clinton. “I think that’s because the ones with the loudest voices also tend to have the most extreme views and this distorts perceptions of where the state is. No doubt, it’s a conservative state, but it’s less conservative than citizens think.”

“These findings speak to why polling is important. It gives voice to those quieter and more moderate people in the state,” Geer added. “And now one can see why someone like Phil Bredesen or Karl Dean could win statewide, because they can appeal to the liberals and the moderates and the many business conservatives across the state.”

Using the same rating method above, Tennesseans describe Gov. Bill Haslam almost exactly the same way they describe themselves, which may explain why, with a 63 percent approval rating, he remains the most popular politician in the state by a considerable margin. “Haslam is very representative of what the state is,” Geer said.

Approval of President Donald Trump, Sen. Bob Corker, and Sen. Lamar Alexander all dropped a few points since the last Vanderbilt Poll in May, to 48, 47 and 44 percent, respectively.

The drop in approval ratings for Alexander and Corker reflect in large part the decline in approval of Congress. Even more notably, President Trump has lost substantial support in Tennessee, dropping 12 points over the last year. Over the same time period, the percentage of Tennesseans who say they believe President Trump is changing Washington for the better has fallen 24 points to 35 percent, while the percentage who believe Trump is changing things for the worse has risen 16 points. In addition, just 39 percent of Tennesseans believe the president tells the truth most of the time. 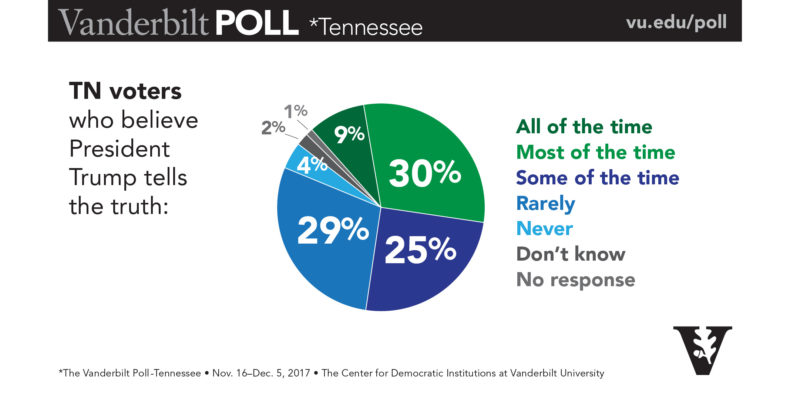 “The broader point is that, for a state he won so handily a year ago, Trump is not overwhelmingly popular here,” said Geer. This finding comports with the upset win in the Alabama Senate race, where Trump campaigned heavily for Roy Moore.

Tennesseans remain deeply dissatisfied with Washington – 63 percent say they are frustrated, and another 21 say they are angry at the federal government. After a brief post-election honeymoon period, Tennesseans’ overall approval of Congress has returned to its typically anemic 23 percent. “What’s really interesting here is that the fall in approval is entirely driven by Republican dissatisfaction with the Republican-led Congress,” Clinton said. “Whereas nearly 50 percent of Republicans approved of Congress in November of 2016, now only a third of them approve of the job they are doing.”

Two-thirds of Tennesseans blame both parties for the dysfunction they perceive in government, and 76 percent say they want their representatives to reach across the aisle in order to get things done—even if it means compromising on some of their own values and priorities.

And that’s a preference that transcends ideology. “There are problems in the nation and the state, and people want problem-solvers and solutions, not bomb-throwers and partisan rhetoric,” Clinton said.

Republican Marsha Blackburn has the most recognizable name in Tennessee’s U.S. Senate race, at 73 percent, with Democratic candidate Phil Bredesen close behind at 65. Republican Stephen Fincher trails considerably, with only 22 percent, but does have substantial name recognition in the western part of the state (46 percent).

Geer cautioned that name recognition doesn’t mean much at this point, and said that this year especially, anything is possible. “You can become very well known in this state in a very short period of time. We will see some very different numbers in the May 2018 poll.”

Tennesseans on the issues

Health care, education and the economy remain the most important issues for Tennesseans at both the federal and state level, far outstripping immigration, gun legislation, income inequality and social issues as top priorities. 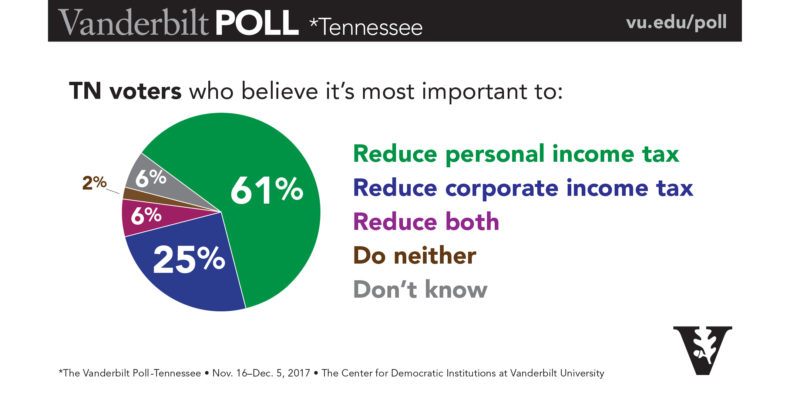 Rural hospital closures: Tennesseans believe government has a valuable role to play in ensuring the accessibility of health care. Eighty-five percent of Tennesseans are concerned about recent closures of rural hospitals, and 71 percent—on both sides of the aisle—believe the state should allocate more funding to keep them open. Fifty-six percent believe the federal government should chip in, too.

Health care reform: Over the last year, Tennesseans’ views on the Affordable Care Act have shifted considerably. In November 2016, 50 percent of Tennesseans wanted to repeal the ACA or replace it with a Republican alternative, yet now only 35 percent supported those outcomes.

Again, much of that dissatisfaction comes from the right, Clinton said. “Remarkably, only 50 percent of registered Republicans in the state now support a Republican alternative [health care plan],” he said.

Charter schools: Asked about their opinions on charter schools, 48 percent of Tennesseans say they don’t know enough about them to have an opinion at all. Of those who do, 10 percent oppose them, 20 percent have mixed feelings and 22 percent favor them.

Drugs: There is widespread bipartisan consensus that the opioid crisis is a severe issue, with 84 percent describing it as either a major problem or an emergency. Support for legalized marijuana continues to rise, with 44 percent favoring its use for medical purposes only, while an additional 34 percent favor making it legal for both medical and recreational use.

Climate Change: In what may be the biggest surprise of the poll, 72 percent of Tennesseans say they believe climate change is likely happening, while 55 percent say there is solid evidence that climate change is responsible for the increase in severe weather around the world.

Russia: More than half—56 percent—of Tennesseans believe Russia likely interfered in the 2016 election.

Unauthorized immigration: On immigration, Tennesseans have little taste for mass deportations of undocumented immigrants. To the contrary, support continues to rise for allowing undocumented immigrants to remain in the country while they apply for citizenship, with three in five Tennesseans now endorsing that approach and the remainder fairly evenly split between allowing them to stay as guest workers and deporting them. Support also continues to rise—up 8 points since May to 72 percent—in favor of allowing these immigrants’ children to be eligible for the in-state tuition rate at Tennessee colleges and universities. 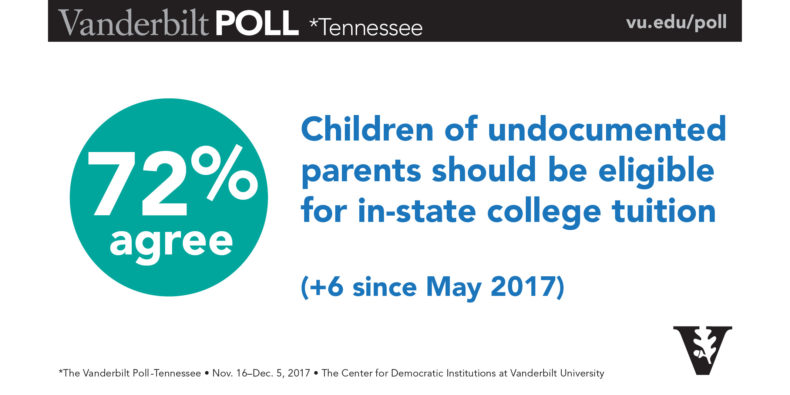 The Vanderbilt Poll is supported by the Center for the Study of Democratic Institutions at Vanderbilt University. The statewide poll is typically conducted just before the start of each legislative session and at the end of each session, in part to determine how closely the results of the session align with voters’ expectations and priorities. CSDI also conducts a yearly Nashville poll, as well as additional special polls. In 2015, the Vanderbilt Poll became a charter member of the American Association for Public Opinion Research’s Transparency Initiative