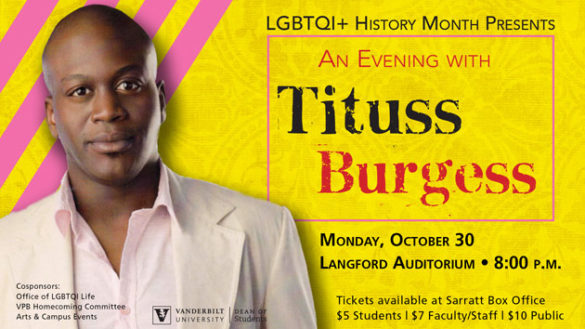 The Office of LGBTQI Life presents “An Evening with Tituss Burgess” on Monday, Oct. 30, beginning at 8 p.m. in Langford Auditorium.

Tickets for the event are available for purchase at the Sarratt Student Center Box Office. Tickets are $5 for students, $7 for Vanderbilt faculty and staff, and $10 for the general public.

Burgess, an Emmy- and SAG-nominated actor, musician and writer, is quickly emerging as one of the entertainment industry’s most versatile and dynamic performers, with his work in television and theater generating both critical and commercial acclaim. Burgess currently stars as “Titus Andromedon” in the Netflix comedy series Unbreakable Kimmy Schmidt opposite Ellie Kemper, Jane Krakowski and Carol Kane. Show creator Tina Fey created Burgess’ outrageous character specifically for him. Season three of the show premiered on May 19, and the series was recently renewed for a fourth season.

Burgess was first introduced to television audiences in Fey’s Emmy-winning NBC series 30 Rock, where he played “D’Fwan,” the vivacious hairdresser and sidekick to Sherri Shepherd’s “Angie Jordan.” Burgess became a breakout star in the series’ fifth and sixth seasons. His other television credits include A Gifted Man, Blue Bloods and Royal Pains.

A veteran of the stage, Burgess made his Broadway debut in 2005 as “Eddie” in Good Vibrations. Since then he has held many memorable roles on Broadway including “Hal Miller” in Jersey Boys, “Sebastian the Crab” in The Little Mermaid and “Nicely-Nicely Johnson” in the 2009 revival of Guys and Dolls. Burgess has also performed in regional theater productions such as The Wiz and Jesus Christ Superstar.

More information about the event >>