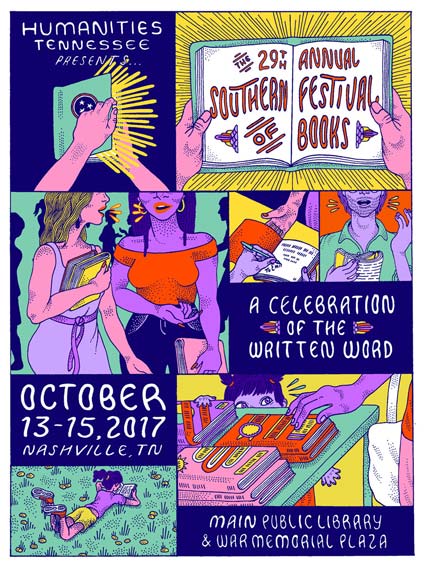 Two Vanderbilt Law School professors who are among featured authors at the Southern Festival of Books: A Celebration of the Written Word will be on panels to be broadcast live on C-SPAN Saturday, Oct. 14. Other Vanderbilt-affiliated authors at the 2017 festival include professors in Cinema and Media Arts and the Owen Graduate School of Management.

The following events will take place on Saturday, Oct. 14:

“Behind the Curtain: Money, Politics, and an Imperiled Republic,” from 11 a.m. to noon and scheduled to air live on C-SPAN 2. The session in the Nashville Public Library’s Conference Room 1B will feature Ganesh Sitaraman, professor of law and a senior fellow at the Center for American Progress; and Nancy MacLean, William H. Chafe Professor of History and Public Policy at Duke University. Sitaraman’s most recent book is The Crisis of the Middle-Class Constitution.

“Johnny’s Cash and Charley’s Pride: Lasting Legends and Untold Adventures in Country Music,” with Peter Cooper, senior lecturer in music history and literature at the Blair School of Music, and singer-songwriter Radney Foster. The title of the panel is also the name of Cooper’s latest book. The discussion will be from 11 a.m. to noon in the Nashville Public Library’s Special Collections Room.

“An Inconvenient Sequel: Truth to Power,” with former Vice President Al Gore and Bruce Barry, the Brownlee O. Currey Jr. Professor of Management. Gore will engage in a Q&A/discussion with Barry about An Inconvenient Sequel, Gore’s companion book to the 2017 documentary film on his continuing mission to draw attention to the climate crisis and influence global climate policy. The discussion, to be recorded by C-SPAN for broadcast later, will take place in War Memorial Auditorium.

“The Arc of Justice: Middle Grade Books on African-American History,” with alumnus Andrew Maraniss, author of Strong Inside: The True Story of How Perry Wallace Broke College Basketball’s Color Line (Young Readers Edition); and Linda Jackson, author of the Twisted Bloodlines series. Maraniss’ biography of Wallace, who was the first African American basketball player in the Southeastern Conference, is being read by all first-year students at Vanderbilt. Maraniss is serving as writer-in-residence at The Martha Rivers Ingram Commons and innovator-in-residence at the Wond’ry. The discussion will be from 2 to 2:30 p.m. in the Nashville Public Library’s Teen Center.

“When Freedom Roams: History and Memories of the American West” with Daniel Sharfstein, professor of law and history in the College of Arts and Science; and author Roger Hodge. Sharfstein’s latest book is Thunder in the Mountains: Chief Joseph, Oliver Otis Howard, and the Nez Perce War. Hodge’s books include Texas Blood. The event will be from 2 to 3 p.m. in the Nashville Public Library Conference Room 1B and is scheduled to air live on C-SPAN 2.

On Sunday, Oct. 15, Jonathan Rattner, associate professor of cinema and media arts, will present his award-winning film The Interior. Rattner, who is an active member of Wildland Urban Interface Artist Collective, is also an associate professor of art. The event will be from noon to 1 p.m. at the Nashville Public Library Special Collections Room. Watch a Vanderbilt video about Rattner’s filmmaking.

This year, staff for the Jean and Alexander Heard Library will volunteer at the festival. Look for them under the same tent as students in the Vanderbilt MFA Program in Creative Writing, who publish the Nashville Review.

For more information, visit the Southern Festival of Books.