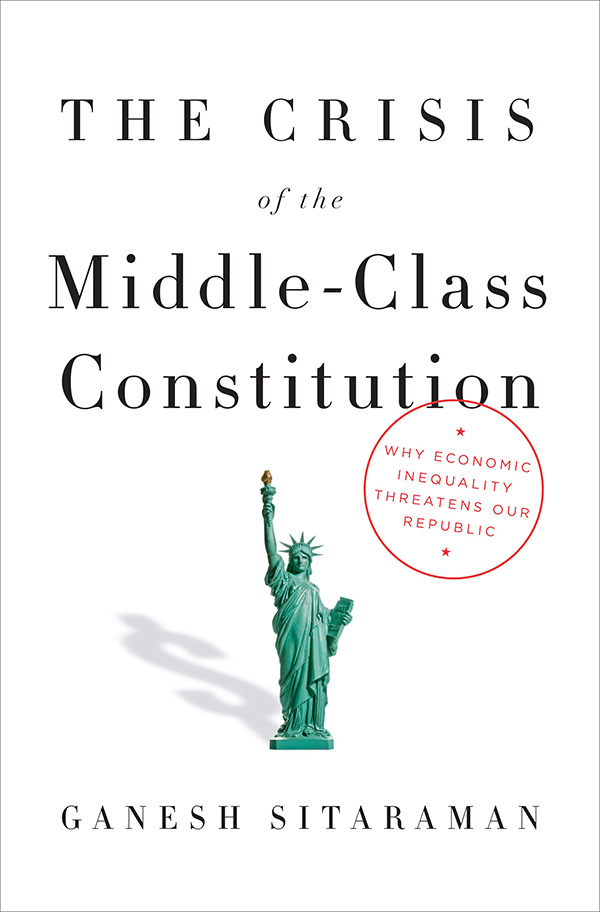 Professor of Law Ganesh Sitaraman believes the United States is facing a stark choice: Either continue along the current path of rising economic inequality and risk oligarchy, or rebuild the middle class and reclaim the republic that the Founding Fathers originally envisioned. Drawing upon his research as a constitutional scholar, as well as his work with Sen. Elizabeth Warren (D–Mass.), Sitaraman makes a compelling argument for helping America’s beleaguered middle class in his new book, The Crisis of the Middle-Class Constitution: Why Economic Inequality Threatens Our Republic (2017, Knopf), which has received wide praise from fellow scholars and the media, including The New York Times Book Review. Here he talks with Vanderbilt Magazine about the book and what inspired him to write it.

You argue in your book that growing inequality in this country is a threat to the Constitution. How so?

Before America’s founding, the answer to the problem of inequality was to build economic class right into the structure of the government. In England, for example, there’s a House of Lords for the wealthy and a House of Commons for everybody else. The idea is that each class has a share in governing but also provides a check on the other, and that’s what prevents strife, violence and revolution.

Our federal Constitution doesn’t have provisions like that. The reason why is that the founders believed America was the most egalitarian country that had ever existed. There was no feudalism, no hereditary aristocracy. And America had land to the west, which meant that settlers could become yeoman farmers and be economically independent. Those were the conditions on which our system was built. The Constitution was designed for a society that had relative equality, and as a result, there are no checks built into it to deal with the current widening gap between the rich and poor.

How do you define the middle class?

One of the problems with using the term “middle class” is that there are so many different views of what that means. Some people talk about it in terms of wealth or income. Some think it has a sociological component, like education or white-collar work. Other people think it’s more an idea or aspiration. There’s something to all those definitions, but the one I use in the book is that the middle class consists of people who are neither extremely rich nor extremely poor. After all, you can’t define the middle class without reference to everyone else. It’s a broad definition, but it’s consistent throughout history, going all the way back to Aristotle, who talked about “the middle” between the rich and poor.

The book was the result of two things coming together. First, I’ve been studying American constitutional history and constitutional law for quite some time. And second, I spent many years working on economic issues affecting the middle class—first as a student of Elizabeth Warren’s at Harvard Law School and then as an adviser to her in the Senate. When I came back to academia after working in government, the country had just gone through the traumatic economic crash and recession, and I began to wonder how people in our constitutional history thought about that problem. What were their views on inequality? That’s really what got me started.

What are some corrective measures we can take as a country to restore the middle class?

The first thing is to deal with the problem of economic inequality. We can do that both by checking the growing concentration of economic power through things like antitrust laws and also by making sure that the people who are struggling have a better shot up through improved wages and educational opportunities. At the same time, we need to ensure that economic power doesn’t turn into political power. When the wealthiest people and corporations are deciding policy, that’s not a republic. To have an actual republic—a representative democracy—there must be campaign finance regulation and a more representative electoral system. We also need to reform our system of lobbying and make policymaking within the government more transparent.

Given the current political divide in this country, is there any reason to be optimistic that the middle class will get help soon?

What makes me optimistic is that in 2016 a lot of energy emerged on both sides of the political spectrum for candidates—namely Bernie Sanders and Donald Trump—who understood that our economic and political structures are broken. Their solutions to fix the problem were different, but a lot of the diagnosis was similar. What that shows is that, as divided as Americans are about a lot of different things, we actually have something really important in common: We understand that our current political and economic system isn’t working for ordinary people. It’s working only for a small set, and that must change.