Just after graduating from college, Ken Burns found himself sick in bed with pneumonia. To help him pass the time, his best friend brought Burns a paperback copy of David McCullough’s classic book on the building of the Brooklyn Bridge. Burns read the book “in one gulp,” then came into the living room in pajamas and bathrobe, saying: “This is it! This is our film!”

“And they all looked at me like I was crazy,” Burns told Vanderbilt University Chancellor Nicholas S. Zeppos in an interview for the latest edition of his podcast, The Zeppos Report.

What many people would have dismissed as feverish utterings instead turned Burns onto his successful career path as a documentary filmmaker. The Brooklyn Bridge became Burns’ first film, earning him an Academy Award nomination before he was 30.

Burns and Zeppos shared a wide-ranging conversation during Commencement Week in May, following Senior Day festivities where Burns was awarded the Nichols–Chancellor’s Medal and then spoke to seniors and their families about heroes and leaders.

Burns’ filmmaking career reads like a version of American history vastly different from the dates-and-places version taught in social studies classes across the nation. “I try to create an emotional archeology of our history,” he said. “Not in the sense of sentimentality or nostalgia, but in the sense of making 1 and 1 equal 3, where the whole is greater than the sum of the parts.”

Burns’ nine-part series The Civil War brought him into the American mainstream, and he’s stayed there ever since with features on jazz, baseball, Prohibition, World War II, the Roosevelts and more. To debut in September on PBS is his 10-part, 18-hour documentary film series on the Vietnam War. “With this film, I’ve tried to create a place where multiple truths exist,” he said.

Burns joined Zeppos on campus for the interview, which took place on May 11, 2017. 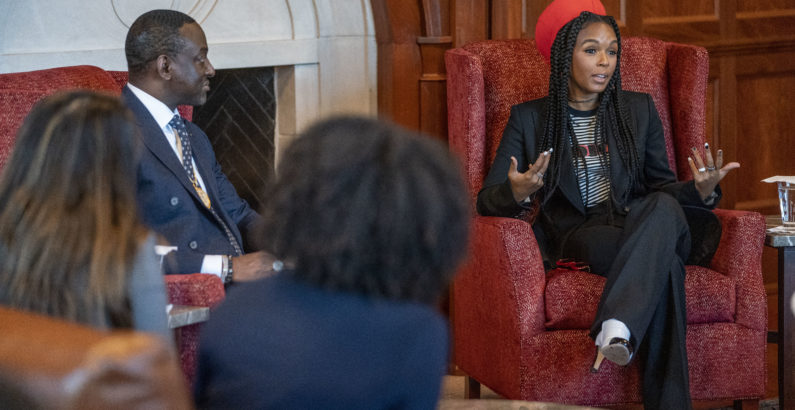