A majority of Tennesseans approve of the job President Trump is doing, but they are less optimistic that he’ll change things for the better, according to the latest Vanderbilt Poll-Tennessee. Co-directors of Vanderbilt’s Center for the Study of Democratic Institutions John Geer and Josh Clinton presented these findings and more to the media via conference call May 30.

Between May 4-15, 2017, Geer, the Gertrude Conaway Vanderbilt Professor of Political Science, and Clinton, the Abby and Jon Winkelried Professor of Political Science, surveyed a demographically representative sample of about 1,000 Tennessee registered voters on a number of important state and national issues, including health care, immigration, the economy, bipartisanship and state and federal elected officials. The margin of sampling error for the complete set of weighted data was +/- 3.3 percent. The complete findings and methodology are available at vu.edu/poll.

Tennesseans are feeling less optimistic about President Trump’s ability to change Washington for the better than they were in November, dropping 13 points from 54 percent to 41 percent, while the percentage who think it will change for the worse has risen from 20 percent to 31 percent. “The fact that it shifted so dramatically from a 34-point gap to a 10-point gap between better or worse in such a short amount of time is striking,” Clinton said. 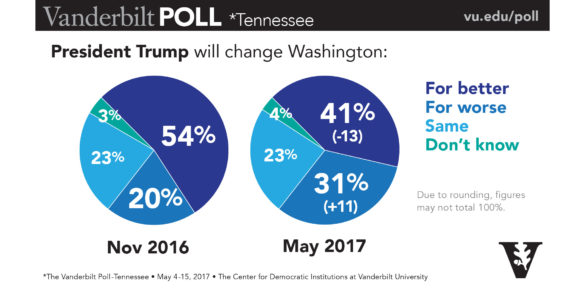 That unease is reflected in the answers to another question about the president in the poll: 53 percent say Trump doesn’t care what people like them think—a figure that includes 45 percent of Republicans.

Despite this, Trump still retains a majority of Tennesseans’ support, with a 52 percent approval rating. “Tennessee is a Republican state and Trump is a Republican president,” Clinton said. “But it’s pretty remarkable that his approval rating is only about 10 points higher than Obama’s at the end of his term.”

All of these numbers were higher in the November 2016 Vanderbilt Poll. But that spike, according to Geer, was likely “the post-Trump optimism that accompanied his unexpected win over Hillary Clinton.”

Health care is more important than ever

The percentage of Tennesseans who say health care should be the state government’s top priority has been steadily rising since 2012 and now stands at 30 percent, tied for first place with the economy. At the federal level, Tennesseans rank reducing health care costs second, after the economy and before terrorism prevention. 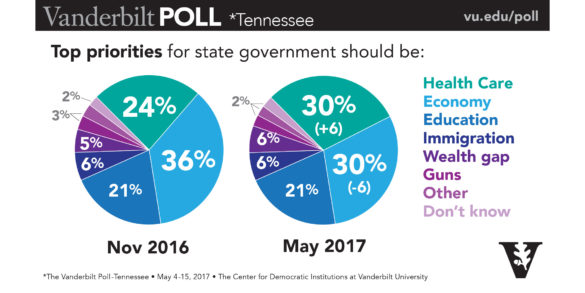 Support for the Affordable Care Act is still low but higher than it’s ever been before—29 percent. Additionally, support is growing among Tennesseans to fix the ACA (33 percent, up 5 from November) rather than repeal it (14 percent, down 7) or repeal and replace it (24 percent, down 5). In another surprise, the percentage of Tennesseans favoring a single-payer health care system has risen 6 points since November to 22 percent.

While Tennesseans may still be skeptical of the ACA itself, several of its signature policies have overwhelming bipartisan support: Just under 80 percent want insurance companies to cover people with pre-existing conditions, not charge them more for it, cover children up to age 26 and cover addiction treatment. 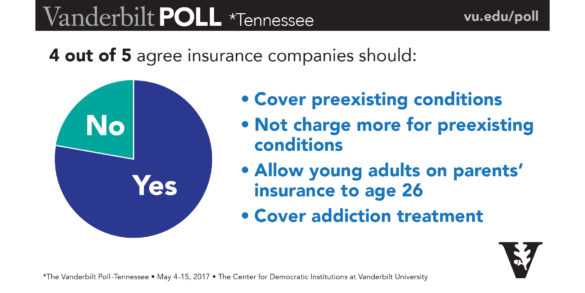 “This is why politics is difficult,” Clinton said. “Policy in the abstract sounds great, but once you start talking brass tacks, you immediately begin to make trade-offs and alienating a lot of people. In Tennessee, we see these bedrock principles for covering pre-existing conditions and so forth, and the challenge for Republicans is how to accommodate them in their health care plan.”

Support for a path to citizenship for undocumented employees is the highest it has been since the poll’s inception: up to 56 percent. And that figure is not just driven by Democrats—40 percent of Republicans favor it too. An additional 20 percent favor the establishment of a guest worker program.

Even stronger is support for helping teens of undocumented parents raised in Tennessee and who attend a Tennessee public university. Two-thirds of Tennesseans say they deserve to be eligible for in-state tuition at public colleges. Again, that’s not just Democrats driving those numbers: 55 percent of Republicans agree. 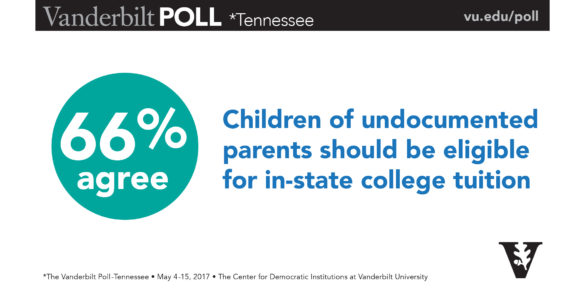 “Such results underscore the importance of conducting this poll, because you would not suspect that based on the political rhetoric you hear,” Clinton said. “Tennesseans are pragmatic and caring people who want to take care of those who are working hard,” added Geer.

Tennesseans trust science, but not the media

Sixty-six percent of Tennesseans say the benefits of scientific research outweigh the harms; that number rises to 72 percent when medical research is specified.

By contrast, there’s very little confidence in the media, with just 21 percent saying they trust all or most of what they read, 43 trusting some of it and 34 percent trusting little to none.

Tennesseans want the state to invest in itself

“We’re not seeing a view of austerity,” Clinton said. “When you ask Tennesseans about government programs that provide clear benefits to increasing the infrastructure or capacity of the state, or economic competitiveness, there’s strong support across all sectors of the population.”

Tennesseans are less divided than their politicians

Three-quarters of Tennesseans want their legislators to reach across the aisle to get things done, including a solid majority of Republicans. “Even though Republicans have unified government for the first time in many years, 65 percent of them still want bipartisanship,” Clinton said.

And a majority of Tennesseans—56 percent—say they enjoy talking politics with someone who holds a different point of view.

“Despite all this partisan rhetoric you hear from political leaders, you don’t hear that as much among the public,” Geer said. “[rquote]The leaders seem to be very divided on all these policy issues, but there’s a lot of common ground that we could choose to focus on if we wanted to.”[/rquote]

Among declared or discussed candidates for governor, U.S. Rep. Diane Black of Gallatin, currently has the highest name recognition in the state, at 49 percent. Former Nashville mayor Karl Dean comes in second at 38, while state Speaker of the House Speaker Beth Harwell of Nashville comes in third with 34. State Sen. Mae Beavers of Mt. Juliet stands at 28 percent, Knoxville businessman Randy Boyd has 26 percent, and state Sen. Mark Green of Clarksville—who recently withdrew his nomination for Army secretary—has 21 percent recognition. Rounding out the field, businessman Bill Lee of Fernvale and state Rep. Mark Norris of Collierville are tied with 14 percent, while state House Minority Leader Craig Fitzhugh of Ripley has 8 percent.

Geer cautions that it’s too early to read much into these numbers yet. “These results offer very early preliminary looks at these potential candidates for governor. No one should hang a lot on these results,” Geer said. “They will change a lot in the coming months. You can become well known very quickly. Even so, these numbers will provide an important baseline as we continue to poll about the upcoming race for the governorship of Tennessee.”

The Vanderbilt Poll is supported by the Center for the Study of Democratic Institutions at Vanderbilt University. The statewide poll is typically conducted just before the start of each legislative session and at the end of each session, in part to determine how closely the results of the session align with voters’ expectations and priorities. CSDI also conducts a yearly Nashville poll, as well as additional special polls. In order to ensure a fair and comprehensive survey, Geer and Clinton consult with the Vanderbilt Poll’s bipartisan Board of Advisors. In 2015, the Vanderbilt Poll became a charter member of the American Association for Public Opinion Research’s Transparency Initiative. Detailed information about the methodology of each poll may be found at the beginning of that poll’s topline report, available at the Vanderbilt Poll website.