Looking to the 19th century for perspective on race and government

Contemporary questions in America about race and the proper role of government are nothing new, said professor and author Daniel Sharfstein, who has explored a 19th century story that brings up those issues.

“In 1865, the United States was a beacon of liberty and equality in the world,” said Sharfstein, who holds the Tarkington Chair in Teaching Excellence and is professor of law and history at Vanderbilt University. “Fast forward 35 years, and what is America?

“It’s a Jim Crow nation. There is Chinese exclusion, labor unions are being crushed and enjoined by the courts and America is actively working to conquer the Philippines.”race

America, in a “blink of an eye” had gone from emancipating slaves to becoming a burgeoning empire, with harsh discrimination against non-whites. In Sharfstein’s new book Thunder in the Mountains: Chief Joseph, Oliver Otis Howard, and the Nez Perce War, he follows the lives of two estimable men of that time with intertwined lives that embody the nation’s struggles.

“I think to understand why we keep fighting these battles, we have to go back to that period and understand how the road from emancipation to empire went through the West,” Sharfstein said.

Howard, a West Point graduate and Civil War general for the Union, was a dedicated proponent of integration after the war. He worked for the Freedmen’s Bureau in Washington, D.C., helping black people make their way from slavery to citizenry, and was responsible for many obtaining jobs, healthcare and education. 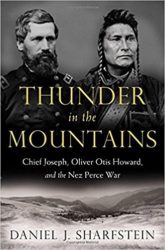 “He had a very robust sense of liberty and equality,” Sharfstein said. “He believed in African American excellence and achievement, and just true equality.”

Howard was so invested in those principles that in 1867 he helped found Howard University, the historically black university in Washington, D.C.

But as Reconstruction faltered and Howard’s administrative abilities proved faulty nearly to the point of scandal, he found himself looking for a way to reboot his life. Returning full time to the Army, he was transferred to the still-wild West, where he made a startling transition from civil rights worker to Indian fighter. It’s also where he clashed with Chief Joseph of the Nez Perce tribe.

Chief Joseph and a few hundred Nez Perce families led Howard and his men on a rigorous 1,500-mile chase that lasted for more than three months in what are now Idaho, Montana and Wyoming. This pursuit through some of the most mountainous and remote terrain in the United States was a popular story in the national press in 1877. Joseph finally surrendered and agreed to live with his people on a stark Idaho reservation.

At that point, Chief Joseph began a long career as an advocate for Native American causes, especially moving his band back to their homeland.

Chief Joseph’s fame eclipsed that of Howard as he advocated for Native American causes in the following years. Despite not speaking English, he effectively communicated on the subject with every federal official he came across on the subject, both at home and in Washington, D.C. President Ulysses S. Grant eventually signed an order giving Joseph’s band their homeland in the far Northeastern corner of Oregon in the Wallowa Valley. Two years later, Grant reneged by issuing a second order that voided the first.

“At that moment, Joseph could have given up,” Sharfstein said. “This is a very definitive pronouncement. ‘You lost.’”

Instead, Chief Joseph kept on lobbying, and although his people never got their homeland back, they were moved to the Pacific Northwest eventually.

“It’s a lesson for us today,” Sharfstein said. “The direction of government is remarkably fluid and there are lots of paths that can lead you to the core of that power. But nothing is ever over. There’s always another forum to keep the fight alive.”