A significant majority of adults in the United States—63 percent—oppose eliminating federal funding for arts and culture, according to survey questions fielded by the Curb Center for Art, Enterprise and Public Policy at Vanderbilt.

“To help empirically inform the current and consequential national debate, we wanted to capture current attitudes toward federal funds for arts and culture, as public opinion can be a key ingredient to informing policy,” said Jennifer L. Novak-Leonard, associate director of the Curb Center and assistant professor of the practice of public policy studies. She collaborated with Rachel Skaggs, a doctoral student in sociology and Curb Center research fellow, on the project.

The Curb Center fielded the questions regarding support for federal funding for arts and culture on the AmeriSpeak Panel, a probability-based panel designed to be representative of the U.S. household population. The panel is operated by the independent research organization NORC at the University of Chicago.

The questions were fielded March 23-27 in English and Spanish on AmeriSpeak’s omnibus survey. The sample consisted of 1,110 adults from across the United States, with 954 respondents answering the questions online and 156 completing them by phone. The overall margin of error is +/- 4.04 percent.

“Our questions about matters of federal funding are a part of broader research we are conducting about public perceptions of artists and the arts within local communities,” Novak-Leonard said. “Using the AmeriSpeak Panel was a timely and robust way to collect data on an important issue—federal funding for arts and culture—on which there has been relatively little public opinion data.” 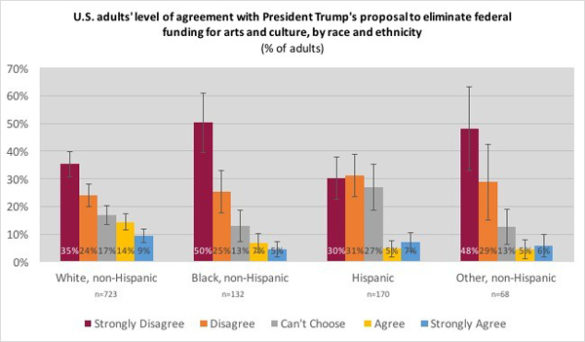 Sixty-five percent of women and 61 percent of men expressed opposition to Trump’s proposal to eliminate federal funding for arts and culture.

The regions with the highest opposition to Trump’s proposal were New England—89 percent—and the Mid-Atlantic—87 percent. The East South Central region had the highest support for Trump’s proposal, with 34 percent expressing support. This region includes Tennessee.