Jason Jarrell Williams, the suspect described in the incident below, was arrested Tuesday afternoon by the Metropolitan Nashville Police Department in the south Nashville area and is currently in custody.

The Metropolitan Nashville Police Department has identified Jason Jarrell Williams, 31, as the man suspected of raping, kidnapping and robbing a woman in the Belmont area. The suspect, who remains at large, is known to walk in the Belmont/Vanderbilt/West End Avenue areas, as well as the Nolensville Pike/McIver Street area in Woodbine.

Suspect description: Williams, who is believed to be homeless, is described as an African American male, 6 feet tall and approximately 150 pounds. He has been seen wearing different clothing but has consistently been seen wearing orange shoes.

More information can be found on the Nashville.gov website. 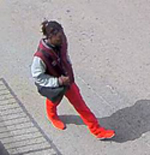