“We burn a hot fire here; it melts down all concealment.”
—Act 3, The Crucible 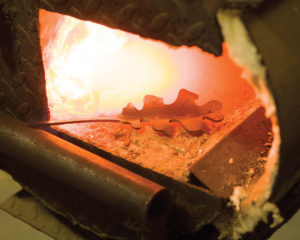 Vanderbilt is a tough school. I’m not talking about admissions requirements. I mean the classes themselves, everything from physics to rhetoric.

Our fair institution has always prided itself on academic rigor, deservedly so. And while the battle wounds inflicted on me by a well-armed set of microeconomic curves 20 years ago haven’t fully healed, more and more I appreciate the demands that were placed on us at Vanderbilt.

I came to a fuller realization of this fact during a recent conversation with retired Vice Adm. Kendall Card, BE’77, for a piece highlighting alumni who are veterans or currently serving in the military. Card relayed the story of a Navy superior reviewing his Vanderbilt transcript, quipping, “If D’s were dogs, you’d have enough to open a kennel.” It didn’t matter. To Card, persevering through Vanderbilt’s School of Engineering had given him all the confidence he needed to know that if he weren’t selected for an assignment then, he’d keep working at it and eventually get there. As it turned out, the interviewer was well acquainted with Vanderbilt’s reputation and invited Card to join the elite group.

The strangely magnificent thing about a university like Vanderbilt is that only by suffering through its hardships are your real talents and true self more fully revealed. For evidence of this, look no further than Hawkins Field.

No matter how high-caliber a baseball player might be, I’m convinced that Head Baseball Coach Tim Corbin—by demanding a strong work ethic and forcing teammates to think beyond themselves—will make that person better. Even if the value Corbin adds comes in the form of imparting a sense of self-awareness or concern for the community or world at large, the playing almost always improves as a result. That’s why gifted high school seniors regularly sidestep million-dollar MLB contracts to play at Vanderbilt. That’s also why a group of former players—several of whom are now MLB’s brightest stars—and baseball-program supporters were motivated to provide the funding needed to complete a new baseball training facility. As explained in the cover story, what Corbin has built goes far beyond athletics; he really has formed a family.

Of course, the upside to all that academic slogging is the rare glimpse of genuine, perspective-altering enlightenment that can come with it. In our “Living History” story, author Andrew Maraniss, BA’92, describes a new slate of University Courses being co-taught by faculty from different Vanderbilt schools and open to undergraduate and graduate students. The class he looks at examines the early history of Nashville from the perspective of its black community. As first-year student Kamala Varma says regarding a tour of the slave quarters at Andrew Jackson’s Hermitage, the students got to see how “the other 90 percent” of the people on the late president’s plantation lived. And in an anecdote perfectly capturing the meaning of “student-athlete,” star Vanderbilt receiver Trent Sherfield talks about how much the course impacted his life, encouraging his football teammates to take the Historic Black Nashville class when it’s offered again.

Someday, he’ll be able to tell his grandchildren about what he learned in that class—along with the story of his nine pass receptions that helped the Commodores steamroll Tennessee in a November classic.