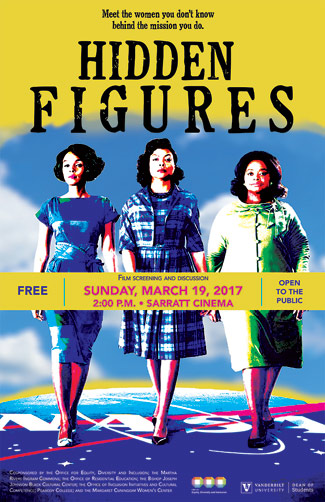 Vanderbilt will host a screening of the Academy Award-nominated film Hidden Figures on Sunday, March 19, in Sarratt Cinema. The screening will begin at 2 p.m. and will be followed by a discussion led by Nicole Joseph, assistant professor of mathematics education. The event is free and open to the public.

Hidden Figures is based on the true story of African American female mathematicians who worked at NASA during the space race. It was nominated for three Academy Awards and won the Screen Actors Guild Award for Outstanding Performance by a Cast in a Motion Picture.

The screening is co-sponsored by the Office for Equity, Diversity and Inclusion; The Martha Rivers Ingram Commons; the Office of Residential Education; the Bishop Joseph Johnson Black Cultural Center; the Office of Inclusion Initiatives and Cultural Competence; Peabody College of education and human development; and the Margaret Cuninggim Women’s Center at Vanderbilt.