As President-elect Donald Trump prepares to take office, registered voters in Tennessee are more optimistic about the future of the state and the country than six months earlier, according to the latest statewide Vanderbilt Poll – a survey conducted twice a year by the Center for the Study of Democratic Institutions. The poll asked a wide range of questions, including items on key policies facing the state and the popularity of the state’s leadership. One of the most noteworthy findings is that Tennesseans remain supportive of an increase in the sales tax for gasoline sold in the state.

Favorability ratings are also up for most officials. Gov. Bill Haslam, who did not publicly support Trump, has an approval rating of 68 percent. Approval ratings are 60 percent for each of the state’s two U.S. senators, Lamar Alexander and Bob Corker – a jump of more than 10 percentage points from last May. The state legislature also has a 60 percent approval rating.

“Gov. Haslam is arguably the most popular governor in the country,” says John Geer, Gertrude Conaway Vanderbilt Professor of Political Science. “He is governing in this era of polarization in a way that isn’t polarizing. He needs to get credit for that. Some may have thought his concerns about Trump’s candidacy would have hurt him with Republicans and members of the Tea Party. But that is not the case.” The Vanderbilt Poll has been tracking the growth of the Tea Party influence in Tennessee.

Haslam has picked up more support from independent and Democratic voters while maintaining his strong base of Republican support, the poll results show. In fact, over 70 percent of Republicans approved of the governor – the same level of support he had in May. 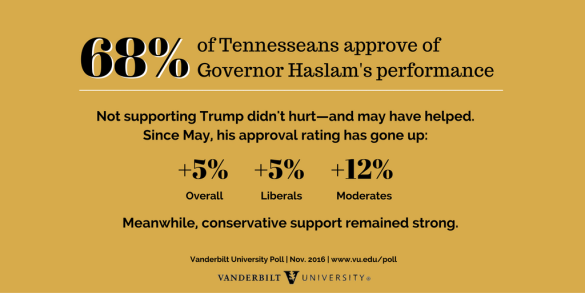 Hot button issues for Tennesseans at the national level are concerns about terrorism, health care and crime, according to the poll results. The most important issue to voters is the threat of terrorism (80 percent), followed by health care (72 percent), crime (60 percent) and strengthening America’s military (59 percent). The lowest priority for voters is addressing climate change – only 25 percent believe it should be a priority.

“Tennesseans are worried about terrorism and they want somebody to be tough,” Geer says. “Trump was the candidate who addressed those fears and concerns.” Josh Clinton, Abby and Jon Winkelried Professor of Political Science, and Geer noted that education went down slightly as a priority for Tennesseans while health care concerns increased.

“Immigration is not as much of a concern for Tennesseans as you might think, considering the strong support for Trump in the state,” says Clinton.

An overwhelming 81 percent of registered voters are optimistic about the future of Tennessee, up from 67 percent last May. Optimism for the future of the United States rose from 40 in May to 59 percent in November 2016.

Tennesseans not as ‘red’ as perceived

On the issues of marijuana, marriage equality and immigration, registered voters tend toward a “live and let live” disposition.

“The state gets tarred with an overly red brush,” Geer says. “The data just don’t bear that out. Yes, the state is conservative, but the citizens are also pragmatic.” 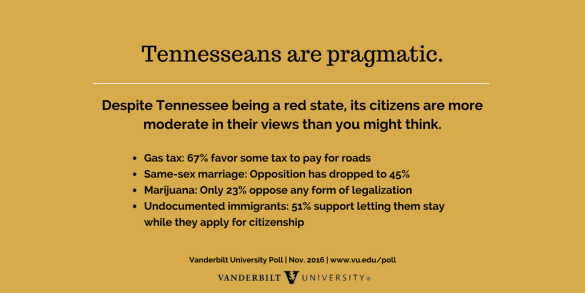 Same-sex marriage is strongly or very strongly opposed by 45 percent of people in the state, but that number came down from 54 percent last May. Thirty-two percent strongly or somewhat approve of gay marriage.

Three versions of the gas tax question were posed. One suggested a 2-cent hike per gallon, another 8 cents and the last 15 cents. Sixty-seven percent of those polled approved of the 2-cent increase, while 55 percent were okay with 8 cents and 47 percent favored a 15 cent tax increase.

Results of the gas-tax questions echoed those expressed during the November 2015 poll. Haslam has said the issue will be on the agenda when lawmakers return in January.

“The public does support a gas tax,” Geer says. “[rquote]This issue is a priority for the Haslam administration, and the governor has the support of Tennesseans on it.”[/rquote]

The Vanderbilt Poll is conducted twice a year by the Center for the Study of Democratic Institutions at Vanderbilt (co-directed by Geer and Clinton) – just before the start of each legislative session, and at the end of the session. The information in the November poll can help inform legislators and concerned citizens about the opinions of their fellow Tennesseans. By contrast, the poll in May provides insight into the successes and failures of the legislative session. The general goal is to provide insight into opinions across the state about the government’s work on new laws and policies. Unlike pre-election polls which largely focus on “likely voters,” the Vanderbilt Poll surveys registered voters. The Vanderbilt Poll was launched in 2011 and it is a member of the American Association for Public Opinion’s Transparency Initiative rewarding openness in the reporting of public opinion data and poll results.