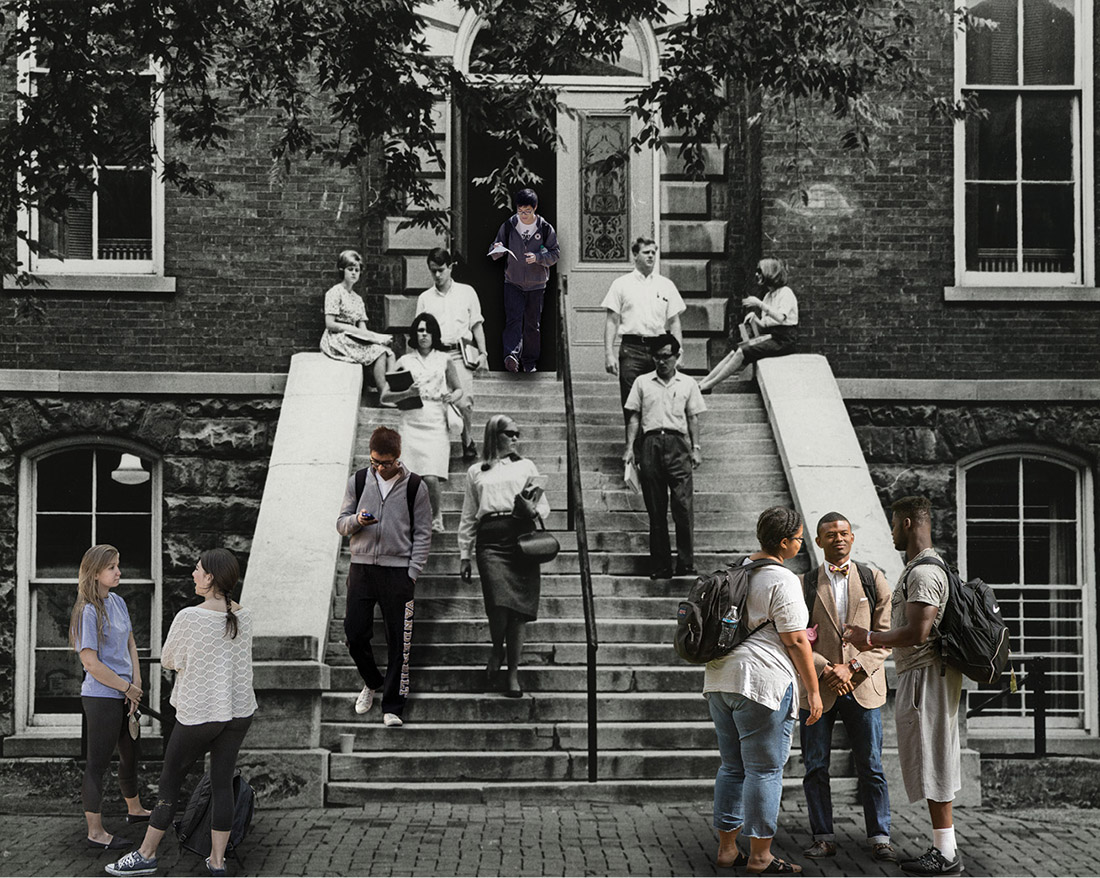 Like most readers of Vanderbilt Magazine, I often flip to the Class Notes section first. After scouring the Class of ’96 for any juicy nuggets, I branch out to overlapping years, searching for names that ring a faint bell. Then, before you know it, I’m checking out all the crazy antics of the Quinqs and continuing straight through to the enthusiastic wedding, birth and job announcements from Vanderbilt’s more recent graduates.

Some of my favorite items are pictures of multigenerational Vanderbilt families—a 1940s-era graduate, say, who’s surrounded by a phalanx of children, grandchildren and great-grandchildren, half of whom are themselves Vanderbilt alumni. Maybe it’s the history geek in me, but there’s something fascinating about people who have lived in vastly different times and yet are still deeply connected through shared experiences. It brings into sharp relief what’s different, and what remains the same, sort of like those split-screen photos that show a building or a streetscape from 100 years ago compared to now.

Vanderbilt emerita professor Susan Ford Wiltshire offers a poetic, personal before-and-after account of an effort she helped lead in the late 1970s and early ’80s to force the university* to grant a woman tenure for the first time in its history. Written in the form of a letter to her daughter, Carrie Wiltshire McCutcheon, JD’05, Wiltshire evokes the on-campus struggles of that era, but then carries us through to a present-day Vanderbilt whose continued strength is fueled by a robust spirit of inquiry and inclusivity.

Of course, changes at an enduring institution like Vanderbilt rarely happen in an instant. As Wiltshire shows, it often takes years of hard work and disciplined patience. But the rewards are great.

Another person who has helped shape today’s Vanderbilt is Robert M. Levy, BA’72. In 1997 he and his wife, Diane, created a need-based scholarship designated for underrepresented minorities. He and Dr. Tiara Aldridge, BA’10, MD’14, who received the Levy Scholarship as an undergraduate, discuss how Aldridge’s current success is helping create a virtuous cycle of inspiration, mentorship and future financial resources for aspiring Vanderbilt students from many different backgrounds.

It’s one thing to view present-day achievements through the lens of hindsight. It’s quite another to feel like you are witnessing a new moment in history. When reading about the cutting-edge research taking place in the lab of bioengineer and biophysicist Kit Parker, MS’93, PhD’98, it’s as if you’ve been granted a sneak peek into the future. Parker has earned some well-deserved star treatment in the media and the academic world for his creation of a robotic stingray that operates using heart-muscle tissue he and his team developed at Harvard. And in a separate research track, he has combined his military and scientific backgrounds to formulate a breakthrough theory about traumatic brain injuries.

All these stories point to the power of long-term transformation—the idea that people who are driven by an inherent moral or intellectual calling bring about important, lasting changes. And just like in the Class Notes, Vanderbilt remains a common thread.

*This sentence has been edited to correct a misstatement in the original text.