“I’ve caught about 200 charges,” Courtney said as she gazed at the floor. Struck by the sheer weight of the number, I was reluctant to go forward with our initial consult. As a newly minted, idealistic Legal Aid Society attorney, I knew that my job was to help provide people reentering society from jail or prison with that second chance they deserved. But the 201st chance? Hesitantly, I pressed on. “What’s your story?” I asked.

I soon learned that Courtney’s father had sold her into sex slavery when she was just 8 years old. Thereafter, Courtney’s pimp had trafficked her from city to city both domestically and abroad. Her first arrest for prostitution came at age 12. Viciously abused since she was a child, Courtney never really had a first chance.

By the time Courtney arrived in Nashville in her 30s, she had been stripped of any lingering self-worth. Drugs provided the only comfort she found. The day she sat before me, however, she had been clean for three years. She had regained custody of her two beautiful daughters, and she was employed at a local business.

Despite her incredible journey, the public housing authority had denied Courtney public housing because of her criminal record. Unable to find a place to live, she came to the Nashville Legal Aid office seeking help. Armed with a federal law that requires public housing authorities to consider evidence of an applicant’s rehabilitation in their admissions decisions, I convinced the hearing officer to reverse the housing authority’s decision. Today, Courtney leads a promising life and proudly raises her girls in a home she can call her own.

I was instantly ashamed of my precipitous judgment of Courtney and profoundly humbled by her resilience. Although I quickly realized my error, many people—even those who have a single criminal conviction—never get the chance to tell their stories. Instead they face insurmountable barriers to obtaining basic necessities like housing, employment and driver’s licenses. Despite the types of offenses on their record, the length of time that has lapsed since their last offense, or overwhelming evidence that they have reformed, their criminal history often is the only thing that matters.

A lack of community support—coupled with social, financial and legal obstacles to basic necessities—often pushes people with criminal records back into a life of crime. This reality is reflected in our nation’s 67 percent recidivism rate. When people reenter the criminal justice system, taxpayers foot the bill and our communities suffer. Just last year, for example, the United States spent more than $80 billion incarcerating inmates at the federal, state and local levels. While doing little to make society safer, the high cost of incarceration also siphons valuable resources away from community programs, schools and roads.

Unfortunately, legal barriers to reentry aren’t my clients’ only concerns. Unwarranted assumptions by people around them, institutional policies and practices, and structural discrimination all impose daily difficulties as well. And with more than 600,000 people getting out of prison each year and another 11.4 million people cycling in and out of local jails, more and more people face these obstacles each day.

While I may have helped Courtney turn a page in the housing chapter of her story, the task of reintegrating more than 70 million Americans who have a criminal record can’t just be left in the hands of public interest lawyers. Whether it is by overcoming our preconceived notions of what type of person a “felon” is, or by choosing to rent to or hire someone with a criminal background, we can each assist in turning a page and help to provide that second or 201st chance. By ensuring that those leaving our prisons and jails have a fair chance, we can break down barriers to successful reentry and make our communities more just, safe and whole. 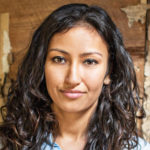 Vidhi Sanghavi Joshi, JD’15, won the prestigious Skadden Fellowship upon graduation from Vanderbilt Law School, where she received the Justice–Moore Family Scholarship. The two-year Skadden award allowed her to launch a program focused on reentry issues at the Legal Aid Society of Middle Tennessee and the Cumberlands.