Trump has sizable and stable lead in Tennessee: Vanderbilt Poll

Nothing short of “a cataclysmic event” could stop Donald Trump from besting Hillary Clinton come Election Day in Tennessee, according to a new Vanderbilt Poll.

The poll, conducted Sept. 19 to Oct. 2, has a margin of error of 3.7 percentage points, a margin very similar to the one in the May 2016 Vanderbilt Poll. The first presidential debate, which happened in the middle of this poll, did little to affect the preferences of Tennesseans. 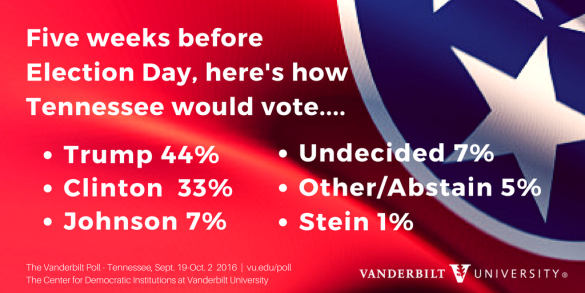 “People are locked in,” said John Geer, Gertrude Conaway Vanderbilt Professor of Political Science at Vanderbilt University and co-director of the Vanderbilt Poll. “They have their preferences and they’re not going to shift them very much, barring a cataclysmic event. Tennessee is going to go Republican. There’s no debate about that.”

Trump has the support of 73 percent of people in the state who described themselves as “angry,” while Clinton did well (66 percent) with people who considered themselves “content.”

“Trump’s supporters are pessimistic at the direction the country is moving,” said Josh Clinton, holder of the Abby and Jon Winkelried Chair at Vanderbilt and co-director of the Vanderbilt Poll. “If you’re a pessimist about the direction of the country, you’re for Trump and for a return to an image of the past.”

Despite speculation that some of Trump’s statements might alienate religious believers, there is no evidence of this occurring – Trump supporters tend to be more rural and religious than those of Clinton.

Backing this up, 82 percent of Democrats back Clinton and the same percentage of Republicans back Trump. Among those who identify with the Tea Party, 73 percent back Trump.

Trump’s numbers didn’t change significantly even after what was widely viewed as a subpar performance in the first presidential debate. The release of his tax returns happened just as this poll was completed and so there is no information on whether that news may have shifted things, but the overall stability in his support over time in Tennessee suggests that answer would be “no.” 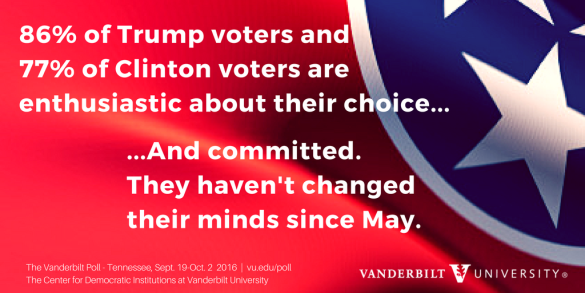 Voters were also asked to select one of several reasons for supporting their candidate:

“Our hypothesis was that Trump would have high scores for being the candidate who could bring about change,” Geer said.

The data confirm this idea. Seventy-four percent of Trump supporters identified his ability to effect change as the reason for their support. Clinton did best (48 percent) with personality and temperament.

More men than women support Trump, but not enough to make a difference, Geer said. “Even if the electorate could only be women in this state, Trump would still win comfortably,” he said.

“The younger tend to be more aspirational in their voting behavior,” Clinton said. “[rquote]Being pragmatic does not resonate with younger voters. They want to hear an aspiration for the future rather than detailed policy plans promising incremental change.’”[/rquote]

The Center for the Study of Democratic Institutions (CSDI) launched the Vanderbilt Poll to provide a non-partisan and scientifically based reading of public opinion within the state of Tennessee and the city of Nashville. The Vanderbilt Poll conducts surveys at least twice a year. In September 2015, the poll carried out its first survey of Nashville. The focus of the polls is to uncover what citizens think about important public policy issues and to make the findings available to citizens, policy-makers and scholars. Since 2011, the Vanderbilt Poll has surveyed more than 17,000 Tennesseans and all poll results are available at www.vu.edu/poll.

The Vanderbilt Poll benefited from the advice from its board of directors on what questions to ask and how the questions were constructed. The current board members are: