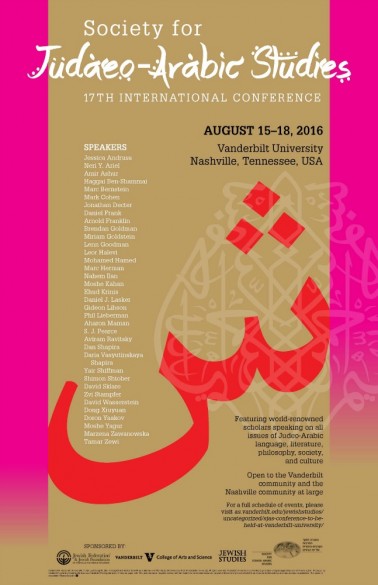 The 17th International Conference of the Society for Judaeo-Arabic Studies, an organization devoted to the study of the history and culture of Arabic-speaking Jews in the Middle Ages, will be held at Vanderbilt University and the Gordon Jewish Community Center Aug. 15-18.

The conference is free and open to the Vanderbilt and Nashville communities.

According to the Society for Judaeo-Arabic Studies’ website, Jewish life began to be transformed during the seventh century due to Arab conquests. At the end of the eighth century at the latest, Jews began using Arabic for all their practical and literary needs with the exception of liturgy. Jewish spiritual activity thus came into close interaction with Arab and Islamic culture at large.

The first session will be at the Gordon Jewish Community Center Monday, Aug. 15, from 5:30 to 7:30 p.m. Sessions for the next two days will be held at various locations on campus. Click here for a complete schedule.

Vanderbilt’s Program in Jewish Studies and the Jewish Federation of Nashville and Middle Tennessee have provided support for the conference.