State courts handle more than 90 percent of trials and judicial business issues that impact Americans the most—safety, health, finances and family. In the last decade alone roughly a billion cases have gone through the state judicial system.

A first-of-its-kind database of more than 10,000 current state judges shows when it comes to race, gender and ethnicity, these courts are not representative of the people they serve.

“[rquote]We need a judiciary that reflects the population and we do not have it right now[/rquote],” said database co-creator and study co-author Tracey George, a professor of law and political science at Vanderbilt University.

“A state court judge has tremendous power and discretion in resolving cases and there is limited oversight of the work they do. A state court judge is not only the most significant person resolving thousands of legal disputes that directly impact every day Americans, they are often the only person. They are the last word in most cases.”

The co-authors believe a truly representative judiciary would have a fair representation of women and minorities on the bench as it does in the population.

“Our legal system is premised on the idea that judges can understand the circumstances of the community they serve. If we can’t meet that presumption, then we may need to reevaluate the role of courts in our society,” the co-authors write.

The study, “The Gavel Gap: Who Sits in Judgement on State Courts?” was written by George and Albert H. Yoon, professor of law and economics at the University of Toronto with support from the American Constitution Society.

See how your state ranked on an an interactive map

More than half of state trial judges and state appellate judges are white men. White men are the most overrepresented group at nearly double their relative numbers compared to the U.S. population. 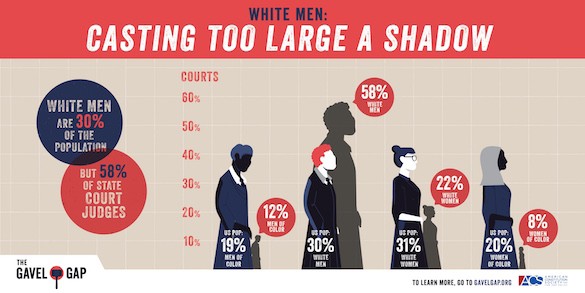 Women are grossly underrepresented on state courts. Women are roughly half of the population and half of enrolled law students. But less than one-third of state judges are women. In some states, women are underrepresented by a ratio of one to four. Not a single state has a representative number of female judges to women in that state. 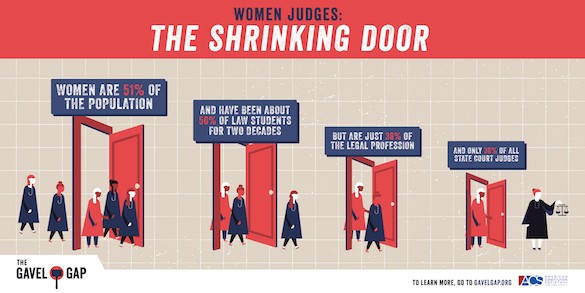 People of color make up roughly four in ten people in the country, but fewer than two in ten judges are a racial or ethnic minority. The story is one of sharp contrasts. In the five best states (considered most representative between judges and residents), minorities are represented at roughly the same rate on state courts as in the general population. But in the five worst, minorities are nearly absent from the judiciary.

Women of color are the most underrepresented group in state courts with only 8 percent of national representation on state trial an appellate courts compared to 40 percent of their relative numbers in the general population. 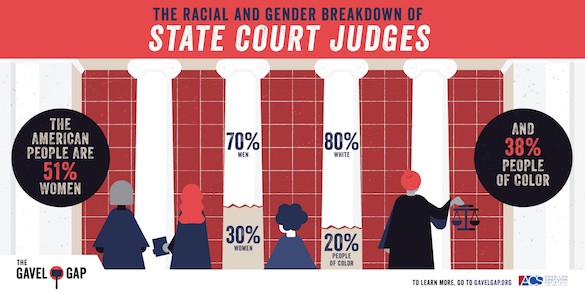 The authors ranked each state assigning overall grades that combined the representation of females and minorities on state courts in comparison to the percentage of the population. Forty-one states had a “D” or “F.” This means these states had 69 percent or less parity between women or minorities on the state court bench compared to the representative population. State with an “A” or “B” had 80 percent or better parity.

“Many of the states that fared poorly on the gender score also performed badly on the ethnic representation,” said the researchers.

She cites the June 2016 Stanford rape trial as a perfect example.

“When a state court judge decides one case, it affects disputes in any way related to that case. So in the case of the Stanford swimmer convicted of sexual assault, a state court judge, who was also a Stanford graduate and a former athlete at Stanford, decided the student should not receive the standard two-year penalty set by the state legislature in California as the minimum sentence for that crime,” George said. “Instead he gave him no prison time and six months in jail. Not only did the judge decide that dispute, affecting the victim and the defendant, it also means by implication that anytime someone who is convicted of sexual assault is a college student, they don’t merit the statutory sentence. So that single sexual assault case has implications for every other sexual assault case on every college campus under that court’s jurisdiction.”

The researchers hope this database will help inform the current method of identifying and selecting judges to make the selections more representative of the areas they serve. And they want this to lead to a pipeline of women and minorities to serve as judges.

“[rquote]We need diversity in race and gender because it brings to the bench all the experiences of the citizens whom those judges serve[/rquote],” said George.

They are also hoping that in states where judges are elected, more women and minorities will run for a judgeship and more voters will be encouraged to elect them.

The next phase of George and Yoon’s research will examine the legal decisions of the judges in this massive database to see if there are signs of influence connected to race, gender and ethnicity.

Download the full report “The Gavel Gap: Who Sits in Judgement on State Courts?”

See how your state ranks on an interactive map