Can you handle the truth about democracy? 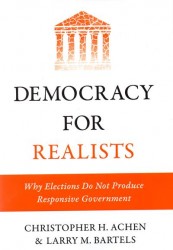 Would you believe that Hillary Clinton’s supporters are more liberal than those of Bernie Sanders?

How about this? In the voting booth, election-year droughts and floods have a major impact on whether an incumbent or challenger wins an election.

And finally: People don’t choose a candidate because they agree with them on the issues. They choose their candidate first, then embrace that candidate’s issues.

This is democracy – real democracy – as introduced by Larry M. Bartels of Vanderbilt University and Christopher Achen of Princeton University in their book of groundbreaking research, Democracy for Realists: Why Elections do not Produce Responsive Governments.

“[rquote]Election outcomes are mostly random events shaped by things like whether the economy happened to grow in the few months before the election[/rquote],” said Bartels, who holds the May Werthan Shayne Chair of Public Policy and Social Science at Vanderbilt University. “So there really isn’t a very strong incentive for politicians to respond to any particular policy agenda, and what they end up doing is implementing the set of policies they believe are good for the country.”

Sometimes the random events that influence a particular election can be teased out if the right questions are asked. Achen and Bartels concluded that shark attacks along the New Jersey shoreline in 1916 cost President Woodrow Wilson votes in the area in his re-election campaign that year.

Bartels and Achen, Roger Williams Straus Professor of Social Sciences and professor of politics at Princeton, studied how other natural events impacted elections.

“We looked at droughts and floods for the whole course of the 20th century and found there’s a pretty consistent pattern of people voting against the incumbent party when their states are too wet or too dry,” Bartels said. “When collective misfortune strikes a society, someone must be blamed.”

The standard, idealistic notion of how and why a candidate gets elected is familiar from civics classes, but doesn’t hold up under scrutiny, Bartels said.

“The basic idea is that people have preferences about policy that they somehow convey to the people who are running things and those people should respond and produce those policies,” Bartels said. “That’s the version you hear in Fourth of July speeches. Political scientists for the last 70 years have generated a lot of evidence suggesting that’s not what’s happening.”

The other standard assumption is that elections are referendums on the performance of incumbents. It is still a popular theory.

“People have studied that for a long time, and I have studied that, but it doesn’t work as well as people like to think,” Bartels said. “We’ve looked at people’s ability to assess an incumbent’s responsibility and found that they are not very good at that.”

Other findings in Democracy for Realists:

These findings are so counterintuitive that, if true, they mean most theories on how to strengthen democracy could not work, Bartels said.

“Most of the standard reform agendas are misguided because they are based on the idea that if only we shoved enough information into people, they would be able to vote on the basis of these detailed issues and preferences,” Bartels said.