In the Americas, one in four say violence is OK when chores aren’t done

More than a quarter of the citizens in the Americas either approve of or understand a man striking his wife if she neglects household chores, according to a new study (new study in Spanish) from the Latin American Public Opinion Project (LAPOP).

“The extent to which the public expresses either explicit or tacit approval of domestic violence varies significantly across the region,” said Lauren Pak, an undergraduate research fellow at LAPOP, based at Vanderbilt University. “Rates within countries range from a high of over 50 percent in Guatemala to a low of under 10 percent in Paraguay.” The national average rate across all countries included in the study is 25.3 percent.

Since the 1970s, LAPOP has gathered public opinion data containing political perspectives from citizens of the Americas.

Pak analyzed data from 16 countries gathered by LAPOP researchers within the 2014-15 round of the AmericasBarometer Survey. The question asked was:

Nations with a higher percentage of respondents who said they approved or understood the violence include Guatemala (53.9 percent), Suriname (43.7 percent), Guyana (30.8 percent), El Salvador (25.6) and Jamaica (24.9 percent). Countries with lower tolerance for hitting a woman who neglects household chores are Paraguay (8.4 percent), Colombia (10.1 percent), the United States (11.8 percent) and Venezuela (12.2 percent). 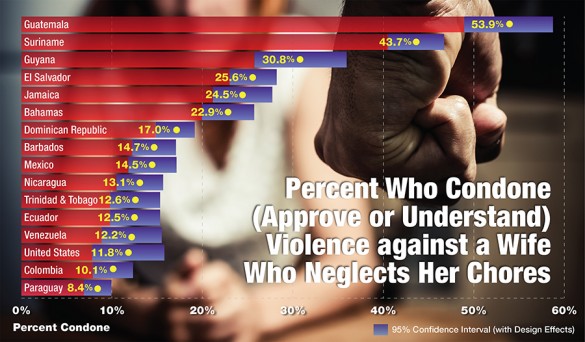 Other results of the survey show that for the region as a whole, people who are more educated, older, live in urban areas and are relatively wealthy are the least likely to accept violence against a wife who neglects her household chores.

“Policies and programs that increase education, economic opportunities and social stability are key to shifting norms with respect to tolerance for domestic violence,” Pak said. “These broader efforts might be pursued alongside more targeted programs that seek to empower women while encouraging men to curb their comparatively higher degree of tolerance for domestic violence against women.”

LAPOP develops, implements and analyzes the AmericasBarometer public opinion surveys. LAPOP data and reports are available to interested researchers at the LAPOP website. LAPOP’s AmericasBarometer project covers 34 nations including all of North, Central and South America as well as a significant number of countries in the Caribbean.

TweetVU researchers seek answers about domestic violence in the Americas

Tweet11% of people in U.S. condone or accept domestic violence in response to falling behind in chores