Presidential contender Donald Trump has a nine-point edge over Democratic opponent Hillary Clinton, according to results from the latest Vanderbilt Poll-Tennessee. The poll shows Trump with 44 percent of the vote to Clinton’s 35 percent overall.

Following the Indiana primary on May 3, when he became the presumptive Republican nominee, Trump’s lead narrowed to four points, notes John Geer, Gertrude Conaway Vanderbilt Professor of Political Science and co-director of the Center for the Study of Democratic Institutions at Vanderbilt University. “The reality of Trump as the clear Republican nominee appears to have caused voters to recalibrate their thinking, at least temporarily,” he said.

The poll went into the field between April 25 and May 11, allowing the researchers to tease out pre- and post-Indiana voter leanings. Pollsters surveyed 1,001 registered voters using both landline and cellphones with a margin of error of plus or minus 4.2 percent.

Trump’s edge is not surprising in a state that has voted predominantly Republican since the 1950s, with notable exceptions in the 1990s when a home-state senator, Al Gore, was on the ticket with former President Bill Clinton. But the margin is closer than expected, Geer said. “[rquote]The state is more competitive than we thought it would be, and that does not bode well for Trump nationally.[/rquote]”

Josh Clinton, Abby and Jon Winkelried Professor of Political Science, is co-director of the poll, conducted at the beginning and end of each session of the Tennessee Legislature since 2012.

“It is also interesting that a pretty sizable percentage – 13 percent – volunteered that they did not know or else that they would not vote for either candidate,” Clinton said. He noted that support for Trump falls largely along partisan lines, but while women are evenly split in Tennessee, Trump does far better among men.

Of those who chose not to opt for either candidate in the poll, 42 percent are Republicans, 36 percent independents and 22 percent Democrats. According to Clinton, some of those undecided voters will likely end up supporting their party’s nominee if the past is any prediction of the future. 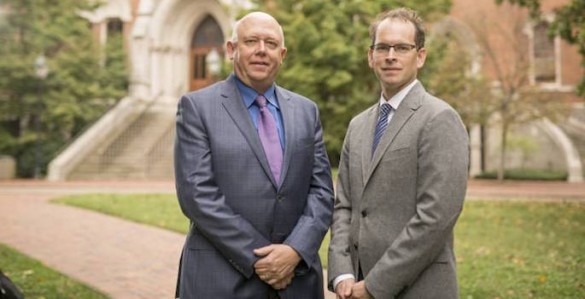 The economy, education and health care continue to top the list of priorities among Tennesseans. But the number of people citing the economy as a primary concern – 31 percent – has fallen steeply from 60 percent in May 2012. Concerns about the economy are nearly even with education issues, at 29 percent. In distant third was health care, with 18 percent of respondents indicating that addressing health care issues in the state is a top priority.

“[lquote]The public believes that the economy is doing so well – especially in the state itself – and they are now looking at other issues that need to be addressed.[/lquote] That is why we see the relative interest in improving education become more of a priority,” Clinton said.

Tennesseans have a greater level of confidence in the Tennessee economy than the U.S. economy. Sixty-seven percent of the respondents think the state is in “very good” or “fairly good” shape. Asked the same question about the United States, only 40 percent said the nation’s best days are ahead of it, and 55 percent said its best days are in the past.

“That’s largely just a partisan gap that we’re seeing playing out in national politics as well,” Clinton said. “While Democrats think the national and state economies are performing similarly well, Republicans and members of the Tea Party think that the state is doing much better than the country.”

Gov. Bill Haslam continues to enjoy a high approval rating of 63 percent. He recently vetoed a bill that sought to make the Bible the official state book. Voters supported that decision, but for different reasons. Some felt the bill violated church and state. Others thought it trivialized the Bible. In the end, a solid majority agreed with the governor’s decision. “This shows that Governor Haslam understood the collective public’s thinking when he vetoed the bill,” Geer said.

For the first time in the Vanderbilt Poll-Tennessee, voters were asked if they considered it important to have racially and economically diverse schools. Seventy-eight percent agreed it is somewhat or very important to have racial diversity while 71 percent had similar views about economic diversity. Regardless of partisanship, the majority of respondents indicated that they valued diversity.

Support for same sex marriage remained consistent with previous polls. About 39 percent of Tennesseans said they would support legislative efforts to make same-sex marriage illegal in Tennessee, in an attempt to reverse the Supreme Court. Fifty percent of voters would strongly or somewhat strongly oppose such attempts.

“This shift reflects the pragmatism of Tennesseans,” Geer said. “[rquote]People have begun to accept that same-sex marriage is a constitutional right.[/rquote] That’s the way it’s going to be and they’re not willing to jeopardize millions in federal aid.”

Both Clinton and Geer cautioned that polls are designed to reflect voter attitudes during a particular moment in time and not influence public opinion. “It’s interesting to dissect how people hold different opinions in their heads and how those do and don’t hang together,” Clinton said. “For example, there is a partisan divide about interference in local governance that is sometimes hard to reconcile with support for particular legislative enactments. It’s interesting to see how general views about the role of government relate to views on particular issues.”

“Polling,” he noted, “is not always neat and clean. It’s not a complete articulation of what voters are thinking, but it’s a useful starting point and should be part of the conversation.”

The Vanderbilt Poll-Tennessee was launched by the Center for the Study of Democratic Institutions at Vanderbilt University in 2011 to be a non-partisan and scientifically based reading of public opinion within Tennessee. Statistical results are weighted to achieve an accurate demographic representation.

To help identify the most important issues and ensure questions avoid ideological and partisan bias, questions are formulated with the help of the Vanderbilt University Poll Board. Current members of the board are: