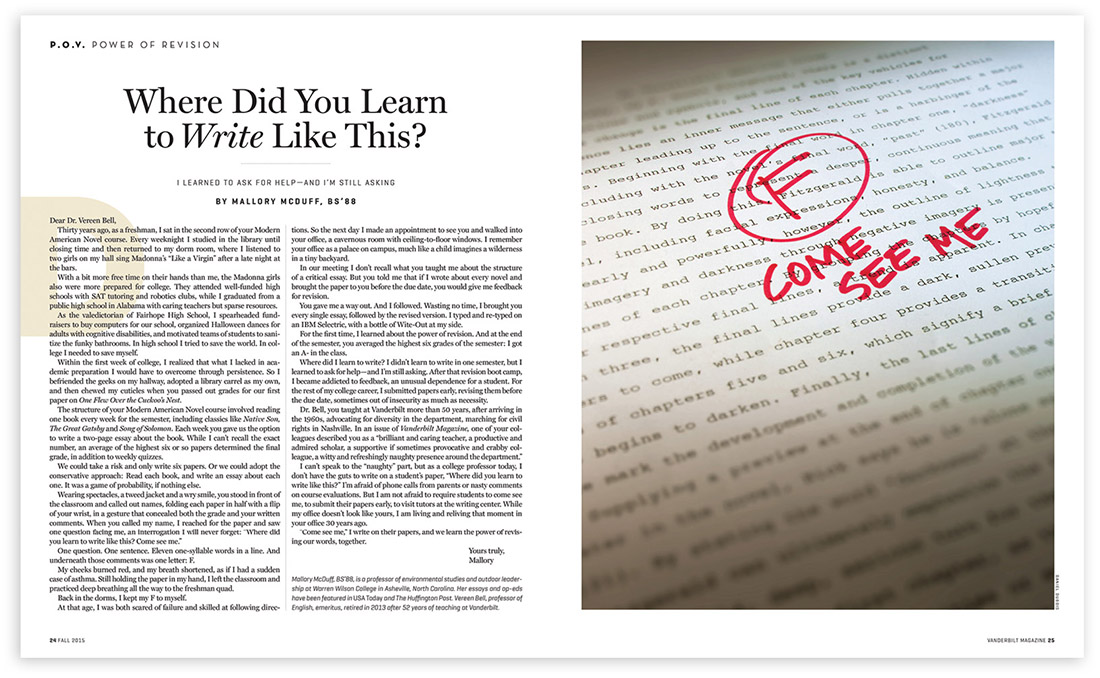 The P.O.V. essay written by Mallory McDuff, BS’88, about her experience in Professor Vereen Bell’s freshman writing class [Fall 2015, “Where Did You Learn to Write Like This?”] resonated deeply within the Vanderbilt alumni community and beyond. A Facebook post about the piece generated more than 35,000 page views of the story online. It also sparked plenty of memories that people shared on social media. Below are some highlights of the discussion.

Oh, how this resonated with me! My “college prep” from Dickson High School lasted for all of two weeks at Vanderbilt in the fall of 1971. After two weeks I was lost: I had no studying skills, I could not write, and I was swimming upstream in every course. My first semester was awful, but each subsequent one got better until I found my groove with a lot of help. My crowning achievement was receiving A’s on papers from a professor who proudly announced that he never gave A’s.

But isn’t that what college is all about? It’s a place where we realize that we don’t know everything and can gain skills to seek new knowledge.

Dr. Bell did the same thing for me. I am forever grateful for the extra time he gave me that helped me learn how to become a better writer. He is truly one of the best professors I ever had!

I had Dr. Bell in 1962 as a freshman, and I could have written this story. Today I am still friends with him, and he told me recently that he didn’t think he’d made a difference in anyone’s life. Wow—I gave him some lively feedback on that!

I loved reading this. It really took me back to freshman year and reminded me how much I truly grew at Vandy. I too was valedictorian of a public school who wasn’t as well prepared for freshman year as many of my peers. A lot of extra effort was put in that first year, and I eventually caught up. Great professors can make all the difference.

Professor [Walter] Sullivan humbled me, and, even after attending graduate school in some pretty highbrow places (including Harvard), I still consider the Vanderbilt English department the best in the world.

Professor [Robert] Birkby did something very similar to me my freshman year. I still remember his scathing comments: “Your ignorance of the facts fatally flaws your argument”—followed by a D. It was at once both the most disheartening and motivating thing I’ve ever had said to me.

I had Vereen Bell at Vanderbilt around 1990–91 for a course on Eliot, Yeats and Wallace Stevens. I’d go into the classroom, and the chalkboards would already be filled with lecture notes. Lord knows how early he’d get into the room to write all that. It was the first place I’d heard philosophy applied to literature.

I’m an English professor myself now, and I’m grateful to Professor Bell and his colleagues for the fine undergraduate preparation I received at Vanderbilt. This fall my eldest son will arrive on campus as part of the Vanderbilt Class of 2020.

I had an almost identical experience at Vanderbilt (a decade earlier with a different professor) in freshman English. I kept my graded papers and tried to share them, and the experience, with my daughters prior to their first year in college. Mallory does a much better job conveying the essence of that experience than I ever did. Thank you.

The Fall 2015 issue of Vanderbilt Magazine was interesting, as it usually is. However, I was struck by the improper pronoun in the article on page 24, “Where Did You Learn to Write Like This?” Mallory McDuff, a professor, did not get what my seventh-grade English teacher taught me. Look at the first sentence in the second paragraph. Should not the “me” have been “I”?

Looks like Vandy has room to work on simple English for its students, as lofty as their entry ratings may be, and maybe a little less on protests.

I wanted to reach out and say thanks to the Vanderbilt Magazine team. I was blown away by the theme and tone of this last magazine [Fall 2015 issue]. Your focus on diversity and the intentional conversations you are having with the readers is so important and needed in our world today.

I am mom to an African American daughter adopted from Ethiopia. As a white woman married to a white man, I was not conscious to the issue of race and diversity in America. I was partly raised in the South, so growing up I knew about the color divide in church, school and neighborhood. But it was never personal. It wasn’t an issue my family faced. But now I see everything in color. Seeing our world through my daughter’s eyes has brought me to my knees wondering how in the world I can make a difference.

So I write letters whenever I can. I commend you and your staff for an amazing job—and at a university in the South. I can’t tell you how beautiful it is to see women and men of all different ethnic, cultural and sexual orientations highlighted as part of the faculty.

I also must highlight Chancellor Zeppos’ words: “If Vanderbilt does not address issues of diversity, inclusion and culture, and [instead] acts like everything is just fine, it will fail as an institution.” Wow. Just wow. My prayer is that other universities and organizations will hear these words and see these examples and be inspired to change.

Thanks again, and keep up the fantastic work.

I assume that because I am a 1976 graduate of Vanderbilt University Medical School, I have received your publication for years. I recently got the fall issue.

I hope I do not offend, but Vanderbilt Magazine is so riddled with Political Correctness that when I read it I suffer from intellectual nausea. It was not always so, but it seems both the university and its namesake publication are increasingly determined to irritate (or provoke) those of us who do not embrace all that’s new, trendy and—dare I say—left-leaning.

We welcome your comments in response to content of the magazine. We reserve the right to edit for length, style and clarity. Mail signed letters to Ryan Underwood, editor, Vanderbilt Magazine, PMB 357737, 2301 Vanderbilt Place, Nashville, TN 37235-7737; or send email to vanderbiltmagazine@vanderbilt.edu. Comments posted through social media or to the magazine’s website also may appear in the print edition of the magazine.