Vanderbilt is now home to a new organization, WalkBike Vanderbilt, which is working to promote a more walkable and bikeable campus.

This spring, WalkBike Vanderbilt invites students, faculty and staff to join in a “policy walk,” a bike and pedestrian safety walking tour of campus. The walk will include campus safety and planning officials as well as representatives of Metro Government Public Works and Planning. The policy walk is planned for April, and the date and additional details will be announced at a later time.

In preparation for the walk, the committee has set up an email address—walkbike@vanderbilt.edu—where you may direct suggested areas to include on the tour that are either examples of effective integration of pedestrian and bike safety or that pose problems. You also may sign up to receive notifications from WalkBike Vanderbilt. 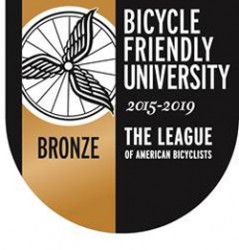 Vanderbilt recently was designated a Bike Friendly University by the League of American Bicyclists. Look for the official BFU signs around campus.

Other committee projects for the spring include:

In addition, Vanderbilt’s Sustainability and Environmental Management Office and Plant Operations collaborated to donate bicycles to the Edgehill Bike Club that were left behind on campus at the end of the 2014 academic year and approved for recycling by the Office of Housing and Residential Education.

For more information about the locations of bike racks and other important information for bicycle and pedestrian commuters on campus, visit the Vanderbilt Health and Wellness website.

WalkBike Vanderbilt representatives, preceded by the organizations they represent, include: