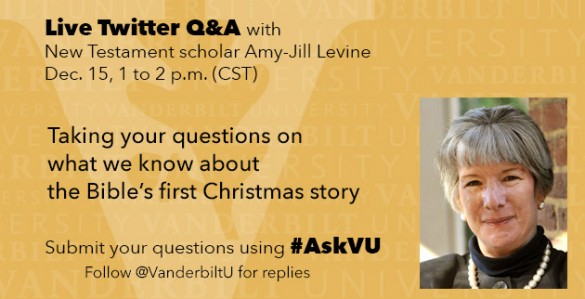 Vanderbilt University New Testament scholar Amy-Jill Levine will be available on Twitter Dec. 15 at 1 p.m. (CST) to discuss what we know about the Bible’s first Christmas story.

Questions for Levine can be tweeted in advance or during the event using the hashtag #AskVU. The event can be read live on Twitter Dec. 15 by following @VanderbiltU.

Levine examines the literary, historical and cultural implications of scripture to understand how, when and why various interpretations arise. With a frequent dash of humor, she exposes anti-Jewish, sexist and heterosexist theologies and other forms of prejudice that directly impact people’s lives.

Levine has received international acclaim for books that include Short Stories by Jesus: The Enigmatic Parables of a Controversial Rabbi (HarperOne), The Misunderstood Jew: The Church and the Scandal of the Jewish Jesus (HarperOne), and The Jewish Annotated New Testament (Oxford), co-edited with Marc Brettler of Duke University.

Among her other publications are the edited collection The Historical Jesus in Context (Princeton), and the 13-volume edited series Feminist Companions to the New Testament and Early Christian Writings (Continuum).

In 2011, Levine became an affiliated professor at the Woolf Institute: Centre for the Study of Jewish-Christian Relations at Cambridge, U.K. She is a featured lecturer in audio/video projects for the Teaching Company’s Great Courses series.