While some people today feel driven to purchase the latest smartphone or other technology, Vanderbilt University historian Michael Bess worries how near-future generations will deal with innovations ranging from pills that boost intelligence to bioengineered body parts for all ages.

Bess, the Chancellor’s Professor of History, is the author of Our Grandchildren Redesigned: Life in the Bioengineered Society of the Near Future (Beacon Press 2015).

“You think of the pressure for students trying to get into college today, with an endless treadmill of higher SATs, grades and other expectations,” Bess said. “Now apply that to the whole range of human capacities, including physical dexterity, mental acuity, memory, ability to focus and more. What if all of these things that we value highly will be modifiable? [rquote]Think of it as ‘Humans XP, Humans 7, Humans 10.’ Just like the Microsoft software, there’s going to be a continuous rise in what is considered the standard or norm.”[/rquote]

Bess has spent the past 12 years delving into fields not typical for a historian, including engineering, medicine, biology, genetics and neuroscience. “I’ve worked on the history of technology in the past, but a whole new world opened up for me with constantly changing information,” he said. For that reason, the book’s website provides spaces for updates and readers’ comments.

Bess explores three main categories of biotechnology: advanced pharmaceuticals, bioelectronics and epigenetics. “The latter is an emerging branch of genetics that would let people basically make changes to how genetics operates at any point in their lives,” he said. “It’s like a layer in between the DNA and the expression of the DNA. The epigenetic factor is how the DNA gets translated into action. It’s not certain that we will be able to use epigenetic tools for these modifications, but it’s something to seriously consider. What if we could not only reverse the progression of a disease such as Alzheimer’s, but also boost healthy people to higher levels of cognitive function?”

Some of the advances in bioelectronics and pharmaceuticals could easily become addictive. “Technologies that would allow us directly to have access to our own reward or pleasure centers in our brains are not beyond the realm of possibility,” Bess said. “It could be done presumably through some sort of trans-cranial magnetic stimulation or through chemicals that have become increasingly refined, causing fewer side effects. In previous experiments, when animals have the chance to just push a button and stimulate the pleasure centers of their brains, they will just keeping doing this—to the exclusion of food, water and sleep. Some people might not be able to control themselves.”

One of the book chapters is titled “Virtual Reality and (Yawn) This Other Reality.” It’s estimated that about one in 10 people around the world regularly play video or online games. While Bess said he has not yet experienced the fully immersive visual experience of wearing a headset in a virtual reality lab, this technology will be widely available soon. A home device called Oculus Rift that offers immersive experiences is scheduled to hit the market next year. Meanwhile, Volvo and Microsoft just announced a partnership that will allow car customers to experience a test drive through the virtual reality of Microsoft’s HoloLens glasses. Microsoft uses the term “mixed reality” since the experience is part digital and part real world.

Bess’ main recommendation with all of these innovations is for society to move slowly. “The tendency is to want to go faster and faster because we see everyone else making advances and we feel the need to keep up,” he said. “If we don’t put the brakes on, we could easily lose control with disastrous effect on society.” 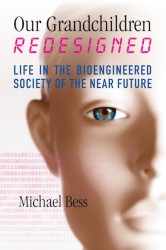 He compares the rapid changes of the early 21st century to the much slower time frame of the Industrial Revolution in the 1800s or even the earlier transition from hunter-gathering to farming. He believes that the oncoming advances in biotechnology have the potential to offer many positive new capabilities, but also, if adopted thoughtlessly, to tear our social fabric apart. “Let’s proceed as deliberately and reflectively as we can rather than letting the advances develop without regulation or controls,” he said.

Bess is pleased that the impact of biotechnology on our near future is being addressed in a number of classes offered by Vanderbilt academic departments, including History, Sociology and the multidisciplinary Center for Medicine, Health and Society, all housed within the College of Arts and Science. Bess teaches a popular class called “Superhuman Civilization” that will be offered spring 2016.

In addition, he is planning a future book on what it is that makes us distinctively human, as contrasted with the capabilities of advanced animals and “smart” machines. “What are the qualities that make us distinct from any machine or other creature?” Bess asks. This book is tentatively titled The Human Difference.