Vanderbilt For Life: Learning and Adventure Don’t End with Graduation

If you’re ever looking for something to fill a random weeknight or weekend, check out the alumni event listings on VUconnect.com. Running the gamut from sporting events to stimulating lectures to community service projects in cities across the world, the stuffed calendar could give most alternative weeklies a run for their money.

Vanderbilt Alumni Association chapters currently exist in 37 U.S. cities and five international locations—the newest one in Japan—and offer a range of activities to help keep Vanderbilt’s 135,000 alumni connected to each other and to the university. The Vanderbilt Travel program also brings together groups of alumni interested in taking an adventure—often featuring a knowledgeable faculty member as a guide—to some of the most exciting destinations on every continent, including Antarctica.

In this photo essay, we tag along on some of these events to showcase the range of opportunities available to alumni to stay involved with the university long after leaving campus.

Each year the popular Alumni Travel program leads groups of alumni to colorful, far-flung locales around the globe—and the photos are always plentiful. These are some of the shots taken by travelers during just a few of the Alumni Travel trips in 2015, which have featured the stunning beauty of Alaska’s Inner Passage; the Celtic heritage of Ireland, Scotland and Wales; the art, culture and music of Cuba; the Great Migration of wildlife in Tanzania; and the transatlantic grandeur of a voyage from New York to London.

The Vanderbilt Alumni Association currently has alumni chapters in 37 U.S. cities and five international locations. The newest is the Japan Chapter, organized during the past year by Heiki Miki, MBA’96 (right), executive officer and general manager of Shinagawa Refractories in Tokyo. On his latest visit to the U.S., Miki, who also has a home in Connecticut, met us at Sushiden, his favorite sushi restaurant in New York. 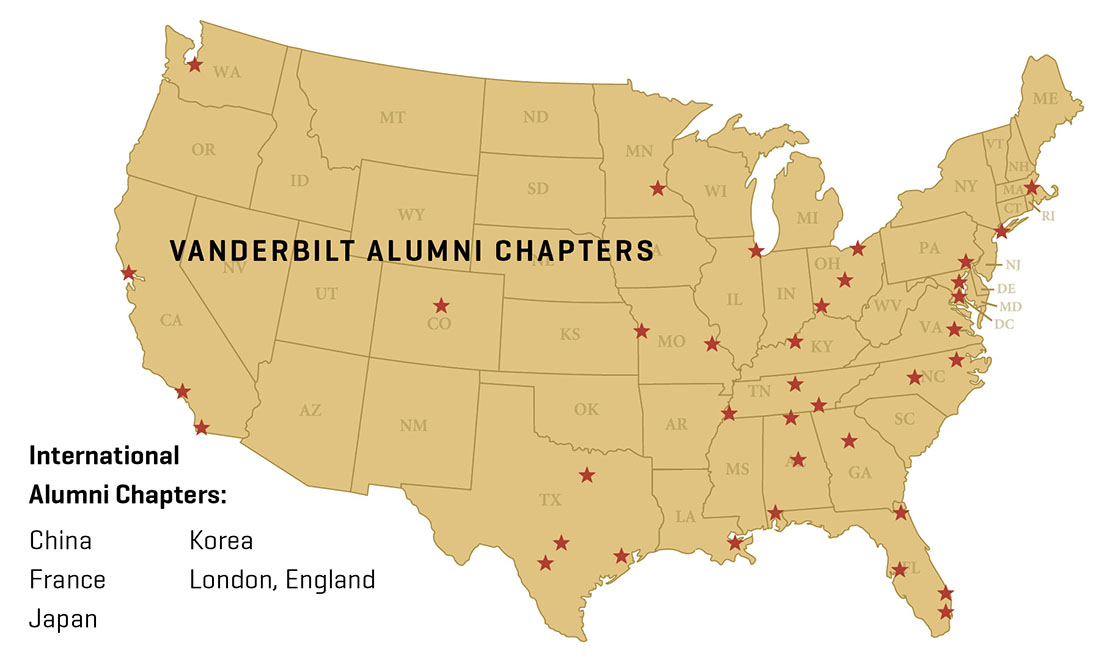 With more than 6,000 alumni, the Atlanta Vanderbilt Chapter hosts a busy schedule of educational, networking, community service, athletic and social events throughout the year, led by chapter co-presidents Sara Tabor Simonds, BA’08, MAcc’09, and Katy Miller, BS’08, MEd’09. But in July it was all about baseball at the chapter’s seventh annual Vanderbilt Night at Turner Field for an Atlanta Braves game. Hosted by Derek Schiller, BE’92, executive vice president of sales and marketing for the Braves, the chapter crowd cheered the home team to a 7–2 victory over the Miami Marlins.

Organized in 2005, the Philadelphia Vanderbilt Chapter has an ever-growing and engaged membership that tops 1,300 alumni. Led by President Erika Duncan, BA’03, the chapter hosts a variety of events, from Commodore sports viewing parties, wine tastings and happy hours to cultural events and lectures. In August the group gathered for a tour of the Discovering the Impressionists exhibit of paintings at the Philadelphia Museum of Art—the only U.S. venue for the exhibition. Before the tour the chapter was treated to breakfast and a lecture by Kevin Murphy, the Andrew W. Mellon Professor of the Humanities and chair of the Vanderbilt Department of History of Art, about the adventurous Impressionists and how they captured the excitement of the emerging urban environment of late-19th-century Paris.

Community service is a hallmark of the Vanderbilt student experience, and alumni often carry that enthusiasm for service into their own communities after graduation through local Vanderbilt chapter events. The Washington, D.C., Vanderbilt Chapter—with a membership 4,700 strong and an energetic president in Jodie Leeka, BE’10, ME’11—personified that service ideal Aug. 23. Led by volunteer Corey Ponder, BS’07 (standing, second from right in the group photo), the chapter took part in the city’s annual “Hands on DC” public schools beautification day, grabbing their paint rollers to freshen up the classrooms of Orr Elementary School in anticipation of the beginning of the school year.

A Send-Off in Style

The beautiful home of alumni couple Keith Hoogland, BA’82, and Susan Hoogland, BS’82, was the setting Aug. 9 for this year’s Chicago Send-Off Party welcoming incoming first-year students from the area to Vanderbilt. University Provost Susan Wente joined the Hooglands in hosting the huge event, which was presented by the Chicago Vanderbilt Chapter and its president, Seth Crist, BA’04, and attended by nearly 200 area alumni, parents, current students, incoming undergraduate students and their families. Since 1968, Vanderbilt’s newest arrivals have been treated to these festive gatherings, nearly 50 of which take place nationwide each summer, giving students an opportunity to connect with each other in a casual setting and experience the Vanderbilt community together firsthand. The Hooglands certainly are no strangers to the Vanderbilt community. In fact, they have created their own alumni network as the parents of three children who have attended Vanderbilt: son McLain Hoogland, BA’09; daughter Alex Hoogland, BA’10; and daughter C.C. Hoogland, a current senior.