“This case could be the Brown v. Board of Education of gay rights,” Fitzpatrick says.

Fitzpatrick is an expert on constitutional law, judicial politics, judicial selection and federal courts. He was in the courtroom April 28 during the Supreme Court arguments on same-sex marriage. He participated in a moot court to help lawyer Douglas Hallward-Dreimeier prep for arguments for Obergefell v. Hodges.

Questions can be tweeted in advance or live during the event by using the hashtag #AskVU, or emailed in advance to www@vanderbilt.edu. The chat can be followed live on June 22 by following @VanderbiltU. Readers do not need to have a Twitter account to follow the chat. The chat will be archived at the Get Social website. 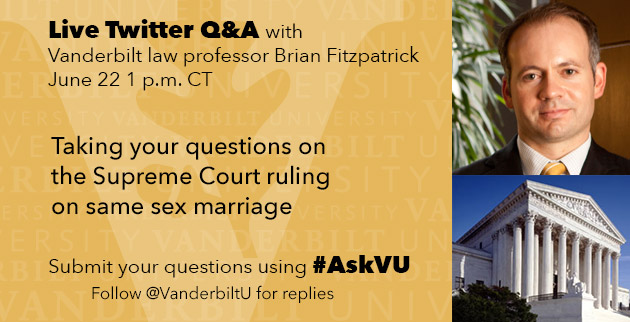