In Wake of Assault, Focus Turns to Prevention, Bystander Intervention 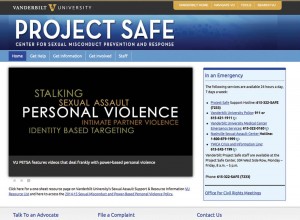 Preventing sexual misconduct and encouraging all members of the Vanderbilt community to stand up, not stand by, when they see someone at risk are the aims of programs underway across Vanderbilt. An assault of a Vanderbilt student June 23, 2013—evidence of which was first discovered by the university on surveillance video and promptly reported to the Nashville police—catalyzed the Vanderbilt community and became part of the ongoing, intense national dialogue about sexual assault on college campuses. On Jan. 27, a Nashville jury found two former Vanderbilt football players guilty of rape in the case. Two additional former players are awaiting trial in the same case.

In a message to the Vanderbilt community Jan. 29, Chancellor Nicholas S. Zeppos wrote, “… [W]e must acknowledge that sexual assaults occur on college campuses across the country, and that Vanderbilt is no exception. But Vanderbilt can make a difference, and we must make a difference, because the consequences of sexual violence—shattered dreams and shattered lives—are intolerable.”

The university has taken numerous concrete steps to address sexual misconduct. Project Safe, previously a program housed within the Margaret Cuninggim Women’s Center on campus, is now a freestanding center dedicated to victim advocacy services and sexual misconduct prevention that opened in September 2014, and the university has added to its staff of prevention educators and victim resource specialists. Hundreds of students, including student athletes, and staff and faculty have attended sessions about Green Dot, a program aimed at bystander intervention.

The university launched an online video education module about power-based personal violence that all incoming students must complete, in addition to Alcohol.edu, which educates students about alcohol’s effects with the aim of helping them make responsible choices. The university also has updated its sexual misconduct policy and has communicated widely to ensure that students and employees know how and to whom to report sexual misconduct incidents.

“We can all commit to this never happening again, but ending sexual misconduct requires more. It requires commitment to our core principles, which demand that sexual harassment and sexual assault will never be ignored or downplayed or get lost in a bureaucracy,” Zeppos wrote. “We must individually and collectively create a culture of transparency, support and cooperation.”